Baltic Dry Index is a daily average of prices to ship raw materials. It represents the cost paid by an end customer to have a shipping company transport raw materials across seas on the Baltic Exchange, the global marketplace for brokering shipping contracts. The index is quoted every working day at 1300 London time. This index can be used as an overall economic indicator as it shows where end prices are heading for items that use the raw materials that are shipped in dry bulk.

Generally, a decrease in the BDI means demand is down for raw materials and that portends a decline in future planned production because of weak consumer demand. In the chart above, you will note a slight increase trend in the BDI in the past few days. In the last 12 months, the BDI has ranged from a low of 1043 (Feb 2011) to a high of 2261 (Dec 2010). Here's the last two years: 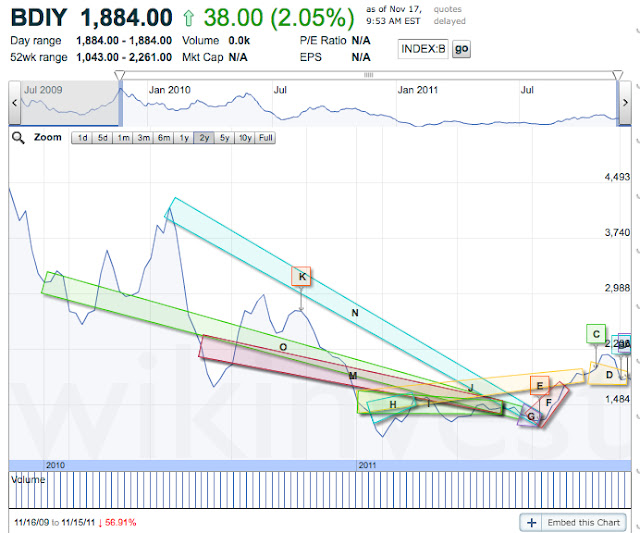 Is it because their demand is down and they don't need to be especially nice to the ship owners to ensure they can get ships in a tight market? Because they know there's too many ships chasing too few charters?

Glenn Reynolds gets an interesting question from one of his readers:


“Did the Administration punt on Keystone because there are more Solyndras out there dependent on high oil prices and Alberta oil threatens to lower the price enough to put more of them out of business?

"You don’t need a weatherman To know which way the wind blows," Dylan once wrote. How else do you create a market for overpriced fuels and products? Jack up the prices and costs of your competition. In private business it would be a violation of the law. Apparently, in government when the goal is "saving the planet" there are no rules. So we see the Department of the Navy getting into the "market creation business" for an unproven business (or, as the insiders put it, "investing in").

Of course, "investments" are always better when the fix is in. But, as Solyndra proves, sometimes the "fix" doesn't take. Which means, with private investors the investors take a bath. With taxpayer money? It was just "unexpected" that competition could drop the price model of Solyndra into the garbage pit.


Despite strong growth in the first half of 2011 and traction in North America with a number of orders for very large commercial rooftops, Solyndra could not achieve full-scale operations rapidly enough to compete in the near term with the resources of larger foreign manufacturers. This competitive challenge was exacerbated by a global oversupply of solar panels and a severe compression of prices that in part resulted from uncertainty in governmental incentive programs in Europe and the decline in credit markets that finance solar systems.

A "global oversupply of solar panels?" Surely, someone should have been monitoring the market before a ton of money was "invested?"