If, years from now, we look back and need to blame an administration for further screwing up our energy business and economy, we can look back at decisions like this: State Department delays Keystone XL decision until 2013 - Oil & Gas Journal. You know, after the election. 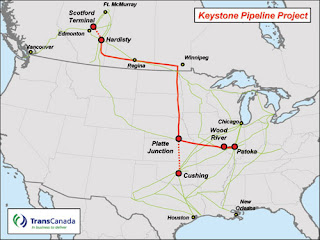 US oil industry and general business trade associations lashed out at the decision.

“Whether it will help the president retain his job is unclear, but it will cost thousands of shovel-ready opportunities for American workers” he said. “There is no real issue about the environment that requires further investigation, as the president's own State Department has recently concluded after extensive project reviews that go back more than 3 years.

“This is about politics and keeping a radical constituency opposed to any and all oil and gas development in the president's camp in November 2012.”

Drevna said, “Turning our back on our good friend and ally Canada will exponentially increase the odds that Canadian oil is shipped to China and other countries overseas and will harm American fuel manufacturers and their employees.”

US Chamber of Commerce Pres. and Chief Executive Officer Thomas J. Donohue said, “Politics has trumped jobs in this decision, and we can only wonder if the administration’s delay will cause Canada to turn their pipeline west and ship their energy and American jobs elsewhere.”

National Association of Manufacturers Pres. and Chief Executive Officer Jay Timmons, citing what he estimated to be 118,000 jobs at stake, called on the administration to reverse a decision he described as “outrageous.”

Somewhere, some idiot "environmentalist" is happy, since the last thing he understands is where energy comes from. I doubt that idiot knows that pipelines already run across our country and Canada.

Meanwhile the President will waste more fuel and pollute more to attend the "carrier game." I guess he figures that he needs the environmental votes more than the U.S. needs jobs and this energy project. Way to put the country first, Mr. President.
Posted by Mark Tempest at 11/10/2011 10:54:00 PM