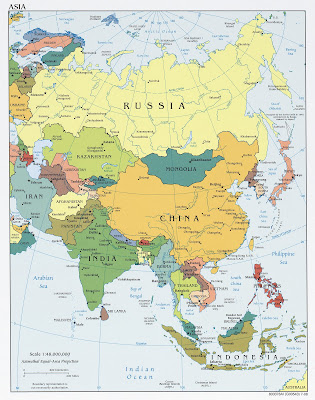 Reported as Pentagon may shift focus to Asia-Pacific at TheHill.com:


The evolving shift will place a premium on military capabilities like ships and long-range aircraft, defense sources told The Hill, and make armored vehicles and lightly armored ships less important.

This will have “negative implications” for the Army’s slice of the Pentagon budget pie down the road, one defense source said, while making the Navy and Air Force more relevant.
***
The review means weapon programs like a new Air Force long-range bomber and the Navy’s new nuclear-powered submarine should survive the $400 billion in cuts the military must make under the August debt deal, defense sources said.

But the strategy review might not produce all good news for the Navy, with several sources saying a ship designed for conflict in shallow waters might fall under the budget knife.

“Programs that are not suitable for the Western Pacific environment, such as heavy armor and the lightly armored Littoral Combat Ship,” said Lexington Institute analyst and industry consultant Loren Thompson, “are getting a close look as possible sacrificial lambs in the push for savings.”

Well, someone seems to be awake over at DoD.

The LCS? Some people have been suggesting that it is not the "do all" it was advertised as for some time. See, CDR Slamander and his extensive archives on the LCS.
Posted by Mark Tempest at 11/01/2011 08:12:00 AM