Somali Pirates: Indian Navy Throws Them for a Loss

Reported at The Hindu : Navy foils Somali pirate attack off Gulf of Aden: 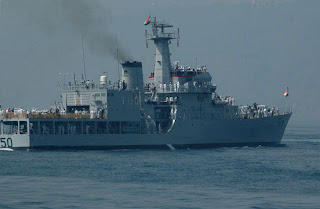 The Indian Navy patrolling the Gulf of Aden on Thursday thwarted a multi-boat attack by sea brigands on merchant vessels, apprehending 26 Somali pirates and confiscating arms and ammunition, in the fifth successful anti-piracy operation since September.
At 9.25 a.m. on Thursday, navy personnel aboard warship INS Sukanya spotted a group of five suspicious boats speedily approaching the merchant vessels of her group.
“The warship immediately altered (its direction) towards the suspicious vessels and challenged them. On seeing the resolve evident in the warship’s action and probably mindful of the reputation for resolute action that the Indian Navy justly enjoys in such deployments, the pirate skiffs reversed course and tried to flee the area,” Captain Manohar Nambiar, Chief Public Relations Officer, Defence, said.
While two of them managed to escape, INS Sukanya successfully intercepted the remaining three boats and, in a well-practiced and professionally executed boarding-and-search action, nabbed 26 Somali pirates with six AK 47 rifles, 12 magazines and about 300 rounds of ammunition.
This is the fifth successful anti-piracy operation conducted by INS Sukanya in the course of her ongoing patrol mission in the Gulf of Aden that commenced in September, the Navy said.