Piracy Updates from ONI Through 3 Nov 11

You can get both ONI reports on piracy at Office of Naval Intelligence.

Among the notable events reported is the hijacking of the tanker Liquid Velvet (see here), about which the ONI Piracy Analysis and Warning Weekly Report states:


(U) GULF OF ADEN: Tanker (LIQUID VELVET) hijacked by six pirates on 31 October at 0842 UTC while underway in position 12:00N – 045:33E, approximately 55 nm southeast of Aden, Yemen. The crew (21 Filipinos and one Greek) were able to lock themselves in the citadel, but the pirates were able to breach it. (UKMTO, Operator)

Some sources, e.g. Shiptalk have reported speculation the odd man out was a Greek security guard. It is noteworthy that the "citadel" was breached. Not sure if this means the pirates were better prepared to breach the citadel on this visit, or if the citadel itself was not well designed or . . . your speculation is as good as mine.

Using the future weather as a tool for piracy likelihood, ONI show two maps, the first being a large view of the Indian Ocean. As color increases to red, weather favorable for small boat piracy increases. And, as noted on this map, don't attempt to use this for navigation, it's an informational chart. 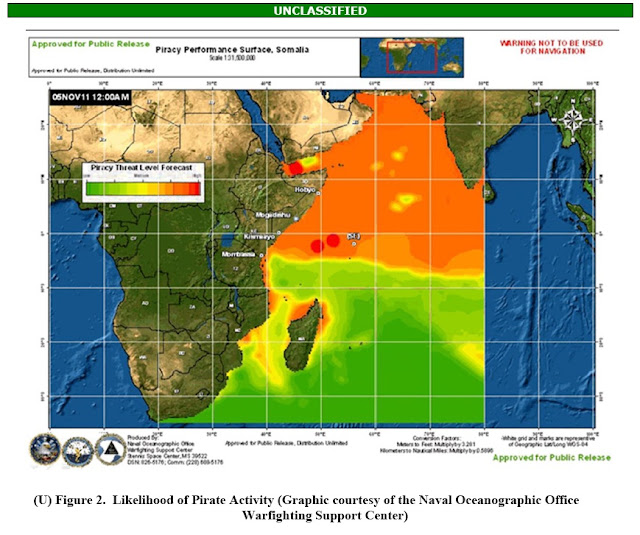 This is followed by a "close up" of key areas. I took the liberty of adding a red arrow and the test "Gulf of Aden" for those unable to spot this on their own. 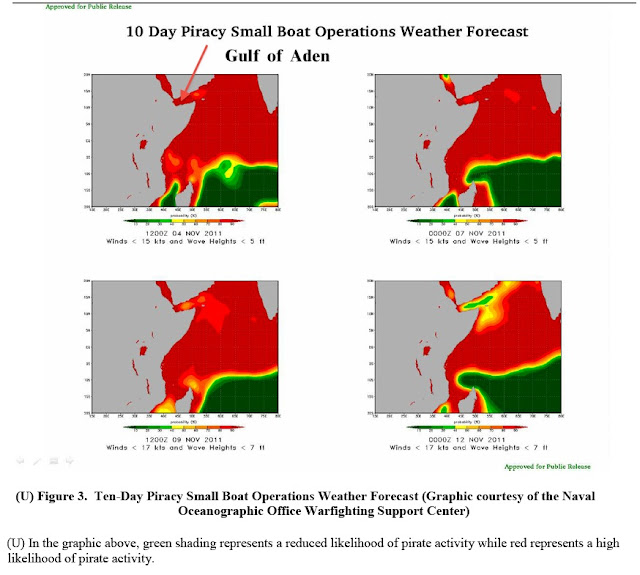