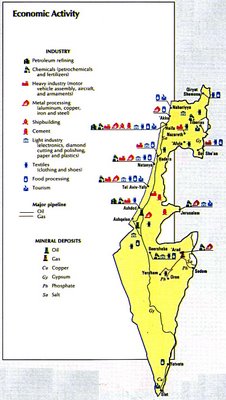 In conjunction with an earlier post on the effect of the Israeli sea blockade on Lebanon -especially on oil supplies for Lebanon's power plants, and as the result of an e-mail from Glenn Germaine (his companies are Seaward Services and Cetacean Marine), suggesting the topic - let's look at Israels' oil supply...

We know that Israel has asked the U.S. for jet fuel as reported here:

The Pentagon notified Congress July 14 of an Israeli request to purchase up to $210 million in JP-8 aviation jet fuel for its military aircraft.
”The jet fuel will be consumed while the aircraft is in use to keep peace and security in the region,” the Pentagon’s Defense Security and Cooperation Agency said.

This would seem to indicate some oil issues. Israel's oil supply situation is well-described here:

From Russia and former Soviet republics. Israel produces only a couple thousand barrels of oil a day, which means it relies on the global market for more than 99 percent of its consumption. It's difficult to name all of the country's suppliers—in 2004, Israel's minister of national infrastructures admitted that "Israel's situation is complicated. We don't have diplomatic relations with most of the countries from which we import oil." But over the past 25 years, significant fuel imports have come from Angola, Colombia, Mexico, Egypt, and Norway. In more recent times, the Israelis have turned to Russia, Kazakhstan, and some of the other -stans for the bulk of their oil.
***
The Israelis have also tried to ramp up their own fuel production. A few weeks ago, they got some press for developing a new way to extract energy from the country's large reserves of "oil shale."

The Slate piece also refers to a Memorandum of Agreement under which the US agrees to provide oil if needed to Israel, but I note that the dates therein indicate the MOA should have expired.

Israel has two refineries, one at Haifa that has temporarily reduced capacity (see here) because it is a target of Hezbollah rockets:

Hezbollah earlier claimed it was targeting the refinery.
"The resistance fires rockets on the oil refinery in Haifa, north of
occupied Palestine," Lebanese Hezbollah satellite station Al-Manar reported on
Sunday.

The other Israeli refinery is in Ashdod. The Ashdod refinery also figures into the oil shale extraction process, as set out here.

In sum, Israel buys the bulk of its oil on the open market. In the current situation, except for the persistent rocket attacks on Haifa, there is no known restriction on importing oil into Israel by ship. As to the sources of the oil- well, oil is very fungible and in the real world, the source is really not that significant compared to a steady supply. As for the JP-8 request, that may be due to the refinery cut back or to other issues.
Posted by Mark Tempest at 7/28/2006 11:11:00 AM