On the Erie Canal- the Continental Sloop Providence is locked out 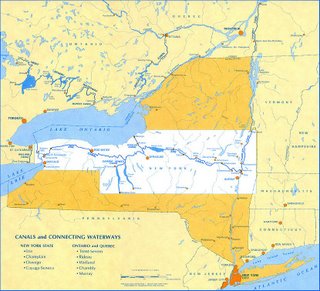 Here's a historical tale that begins with the announcement that the sloop Providence won't be visiting Bay City, Michigan for a festival of "tall ships" as reported here. Why? Because of flood damage to the Erie Canal.

Amazing. Like many who grew up in the West and Midwest, I learned a little about the Erie Canal when I was a wee lad in school, but thought that the Canal had long fallen into disuse. I was wrong. It seems that the Canal (although altered from the original 1825 version) has experienced a rebirth and is quite the attraction for vacations and touring. And a history that reminds us of how much of the Midwest was opened through the canal's links to the Great Lakes.

Now, after some severe flooding caused by recent storms, a portion of the canal is closed for repair, and that has created some issues for those businesses that have grown along the reborn canal as well as creating some detours for canal users:

hile state Canal Corp. officials say that 90 percent of the 524-mile system is reopened after a series of storms and floods, Lock 10 in Schenectady County, along the Erie Canal, could be closed for as long as two months.

That means one long detour for folks using the waterway — at the height of its tourist season.

The areas that sustained the heaviest damage, mostly in the Mohawk River Valley, reopened at the end of last week after workers removed debris that disrupted travel along 300 miles of the system, said canal spokeswoman Jennifer Meicht.

Officials closed 45 of the canal's 57 locks in response to end-of-June storms that left some locks under several feet of water. The locks remained closed during the July 4 weekend, a popular time for boating.

So far, the damage appears to not have taken as badly a toll on the system as officials had feared.

Boat operators and state transportation officials agreed that it was one of the worst storms to ever hit the canals.

"The actual locks and the gates themselves came through with flying colors," Meicht said. "They're really designed to withstand the harshest conditions."

But the lock in Cranesville near Schenectady will remain closed for six to eight weeks because of ongoing dam construction that was disrupted by the storm, officials said.

As a result, westbound boaters must head north from Albany through Lake Champlain and take the St. Lawrence Seaway through several Canadian canals.

Want to get to the Hudson River? Take the Oswego Canal channel to Lake Ontario. To the St. Lawrence. To the Champlain. To the Hudson.

Meicht said the detour — adding about 400 extra miles — would take about two weeks. Many boaters are expected to use trailers to haul their vessels overland and avoid the closed lock, she added.

Meanwhile, locks 11 through 15 in parts of Seneca, Cayuga and Oswego counties are expected to open by next week.

Officials estimate the damage so far will cost between $50 million and $60 million and cleanup in the surrounding areas is far from over.

About 13,000 privately owned tour boat operators use the Erie Canal a year, according to the Canal Corp.

Nearly half of all boating activity takes place in July and August, according to its figures.

Fourth of July weekend wasn’t all firecrackers and bottle rockets for Ray Faville.

For the Whitehall business owner, the holiday was called on account of rain, as surly, brown floodwaters forced the closure of 45 of the New York State Canal System’s 57 locks.

"July Fourth weekend, we had a ton of reservations, and they all canceled," Faville said. He owns the Finch & Chubb Restaurant & Inn and the Lock 12 Marina. "A lot of boats tied up at the south end (of the Champlain Canal) were waiting to come through, and we had quite a few tied up here who canceled their plans and went home to Montreal."

And Faville isn’t alone. Shutting down so much of the canal system, which includes the Erie, Oswego and Champlain canals, had some less-than-positive consequences for other local businesses that depend on tourism revenue from summer boaters.

"I think it’s been dead, to be truthful," said Marjorie Mohn, owner of The Times Emporium in Whitehall. "It’s really effected my business because people couldn’t get through."(source)

It has probably "affected" her business, too.

And, as noted at the top, it has had an impact on events off the canal. The Continental Sloop Providence is a

And, probably more important to the modern age, is a movie star, having played two roles in the "Pirates of the Caribbean: Dead Man's Chest" movie.

Called "a sort of floating classroom," the Providence fufills that role by reminding us of the once great stream of commerce that was the Erie Canal. And it serves to teach of the new use of the Canal.
Posted by Mark Tempest at 7/11/2006 05:36:00 PM