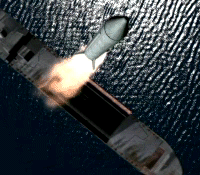 From a Washington Post commentary by James Jay Carafano of Heritage Institue, in which he deeply discounts the threat posed by North Korean ICBMs and the container packaged "nuke in a box" concern, he writes: Missing the Real Missile Threat:

If a country was serious about wanting to attack the United States with nuclear fire in a manner that would ensure surprise, leave no fingerprints and guarantee success, there's a much easier, better and cheaper way. It's one that could avoid the challenge of smuggling weapons into U.S. ports under the eyes of law enforcement, intelligence, customs officials and the Coast Guard: Put the missile on a ship disguised as a commercial freighter or private craft, sail near American waters and fire.

The North Koreans could adapt a short-range missile, such as a Scud. They already have them, and they know they work. The Scud has a large "throw-weight" (meaning it can carry a very heavy warhead) and could deliver a weapon at close range with ease. Building an improvised vertical launch platform for the missile is no significant technical challenge, nor is figuring how to make firing accurate enough to shoot a nuke at New York or Washington.

What's better (from an enemy's standpoint) is that the missile firing might well go undetected. Even tracing the perpetrator after the fact might be tough, particularly if the ship were scuttled after the firing. We wouldn't know who to retaliate against.

Now that's a real threat -- one we should take seriously.

This concept has been covered before- at The CounterTerrorismBlog here:

Reader Timothy Thompson, who is always able to provide keen insight into weapons systems, comments on the missile purchase:

Other relevant links here ("Iran's New Missiles"), here ("Iran's Cruise Missile Threat and Merchant Ships") and all the links therein. And remember that SecDef has mentioned this scenario before:

Mr. Rumsfeld also was asked about the danger of terrorists or rogue states attacking the United States by putting a short-range Scud-type missile on a freighter and firing it close to U.S. shores.

He said one Middle East nation already has “launched a ballistic missile from a cargo vessel.”

“They had taken a short-range, probably Scud missile, put it on a transporter-erector launcher, lowered it in, taken the vessel out into the water, peeled back the top, erected it, fired it, lowered it, covered it up. And the ship that they used was using a radar and electronic equipment that was no different than 50, 60, 100 other ships operating in the immediate area.”

Other U.S. officials have said the nation was Iran, which tested a freighter-launched missile in the Caspian Sea in the late 1990s.

“It is true that the big distinction we make between intercontinental, medium-range and shorter-range ballistic missiles doesn’t make a lot of sense if you’re going to move the missile closer to the target,” he said. (source)

As long as I'm repeating things, go visit MissileThreat.com at the Claremont Institute and enjoy their movies of a merchant ship launch here (big) or here (smaller) to see how it would work.
In short, Dr. Carafano is not raising a brand new issue with his comentary, but he does a service by keeping the issue alive.

UPDATE: Forgot to add about the EMP danger of a nuke exploding above our land mass. See "EMP Heard Again" which even has a quote from The Hertiage Foundation

An EMP attack damages all unprotected electronic equipment within the blast's "line of sight" (the EMP's "footprint" on the earth's surface). The size of the footprint is determined by the altitude of the explosion. The higher the altitude, the greater the land area affected. A Scud-type ballistic missile launched from a vessel in U.S. coastal waters and detonated at an altitude of 95 miles could degrade electronic systems across one-quarter of the United States.

UPDATE2: My version of a DPRK merchant hull with a SCUD TEL. The ship is the one intercepted by the Spanish Navy carrying SCUDs to Yemen as reported here.

UPDATE3: Everybody scooped by China Confidential? See here for a report that the DPRK "May Have Helped Iran Test a Sea-Going Scud."
Posted by Mark Tempest at 7/26/2006 12:40:00 PM