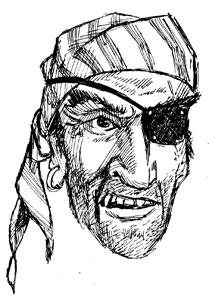 What is about piracy that it doesn't seem to sink in with people that it is a real menace to commerce and to lives? A report from the front lines here:

Attacks by all-too-real modern pirates have increased by 168 percent in the past 10 years. Armed with ship tracking systems, speedboats and rocket-propelled grenades (RPGs), these seagoing bandits are enjoying an unlikely renaissance.
***
Modern pirates use intelligence (often tip-offs from corrupt port officials), satellite phones and tracking technology to plan attacks on valuable cargo, but one tool of modern pirates remains the same: the rope and grappling hook. Storming a ship in motion requires special forces-style skills and many in the shipping industry believe some of the more sophisticated modern pirates are rogue military units. A relative absence of risk is also behind the rise in piracy, according to Newton.

"We don't carry armed guards and nobody is going to pursue you because it is international waters and no one has jurisdiction," he says. "Once they get on board, there is nothing you can do if they are armed and you are not. As captain, the last thing I want is for my crew to get hurt."

Another reason why piracy is so risk-free is that many victims fail to report the crime. Shipping companies would rather bear the loss of US$20,000 stolen from a safe than report it to their insurers and face a hike in premiums. Insurance premiums rose by 300 percent for vessels entering Yemeni waters after a suicide boat rammed into the Limburg, a French oil tanker, in October 2002.
***
According to Mukundan, naval vessels are willing to discourage pirates with a show of force, but rarely want to capture and detain pirates in international waters. The US navy recently caught and detained pirates who attacked a Thai fishing vessel near Somalia, but eventually had to release the men because neither the Thai government nor any other would put them on trial. Where ships have been seized and crews kidnapped off Somalia, shipping companies simply pay the ransom demands of pirate militia.

Just as traditional pirates can symbolize the inequalities of the early imperial era, so modern pirate activity is founded upon economics. About 90 percent of world trade is carried by sea. Cost-cutting has made modern cargo ships more vulnerable than ever to attack, according to Numast, the ship officers' union in London's East End.