A piece of military history -sorta

It's 1972. Off the coast of Vietnam, thousands of American sailors are working in the heat of tropical sun and humid nights to support gunnery and air missions. On off nights, movies are shown to the crews of the ships.

The movies came from the Navy Motion Picture Service which was essentially a library of movies that could be checked out by a ship. Movies could also be transferred from ship to ship. The "movie officer" had a tough job - trying to meet the entertainment needs of young sailors for weeks at sea. And the pool from which to select was not deep. It seems to me that most movies were a few years old and were generally of "B" quality. Spaghetti westerns, John Wayne movies and comedies were welcome. Not too often were deep psychological films well-taken. Some movies transcended all the others and were exceptionally valuable trading material due to their high demand.

Now, remember, it's 1972. It's the year Jane Fonda visits North Vietnam. It's also the year of the April Offensive, when the NVA came rolling across the DMZ with beaucoup tanks. The Navy got busy with gunfire and air support for the South Vietnamese Army. The Navy mines the harbors of North Vietnam. Many Navy ships end up off the coast of Vietnam. 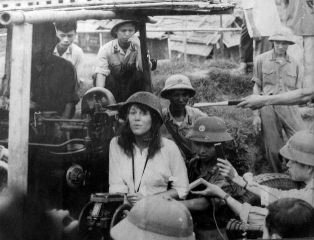 You also have to remember that in 1972 there were no VCRs, no DVDs. Movies were just film, run on projectors.

Got the picture? Well, here's another bit of Navy history probably rarely, if ever, recorded until now. The most highly sought after film on the ships off Vietnam in 1972 was a Jane Fonda film.

And the movie was Barbarella.

And, as can be seen at Barbarella Headquarters, the reasons were not the acting performances of Ms. Fonda or John Phillip Law. Nope. The popularity was due to the costumes more or less (mostly less) worn by the actresses. So, in an ironic twist, Ms. Fonda was helping morale at the same time she was, well, trying to hurt morale. 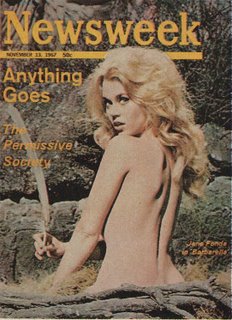 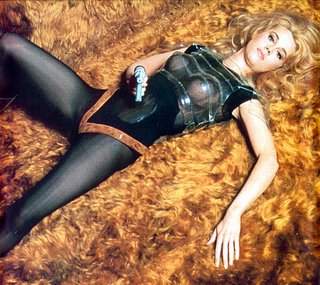 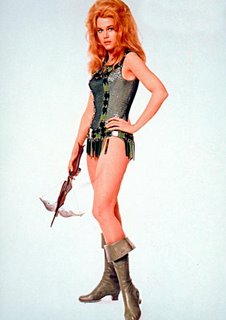 Of course, the movie was released in 1968, so it was old enough to be in the Navy system (we never got first run movies). Now, I understand that a remake is in the works, this time starring Drew Barrymore. 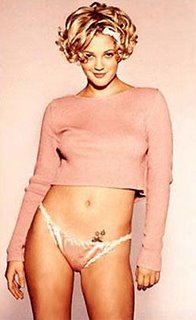 I hope our current warriors enjoy the new version.

(Blog sweeps? Over to you, Lex)

UPDATE: Oh, yeah, it was also the last Jane Fonda movie I have ever seen.