Malacca Strait piracy to pick up? 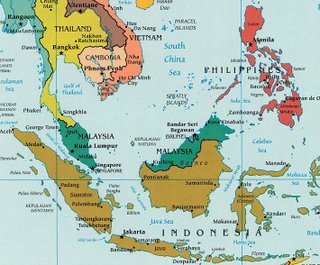 Pirates armed with AK-47 automatic rifles and grenade launchers attacked two vessels leased by the UN in separate incidents in the northern part of the Straits last week, according to the International Maritime Bureau.

"We are very concerned because pirates are not normally so heavily armed, and these attacks happened in a daylight" in what was a "hot spot" for kidnappings before an Indonesian government campaign last year, Noel Choong, the head of the IMB, saidWednesday by telephone from the agency's headquarters in Kuala Lumpur.

"When robbers attack during the day with such arms, normally their interest is in kidnapping the crew for ransom," Choong said. The IMB is part of the International Chamber of Commerce's Commercial Crime Services unit.

"The number of attacks decreased drastically in the Malacca Straits" after the Indonesian government began a system of patrols in July 2005 known as Operation Gurita, Choong said. "It may be that people think Gurita ended."

The Southern Region marine police have not detected any armed escort ships encroaching Malaysian waters while providing protection for merchant ships in the Melaka Strait.

Its chief ACP Isa Munir said the armed escort service, based in Singapore and manned by ex-elite members of the armed forces, was being closely monitored.

"Maybe now they have stationed their security personnel on the ships and no longer on escort ships," he told Bernama, here Wednesday.

The armed escort vessels in the narrow strait are unwelcomed by the littoral states - Malaysia, Indonesia and Singapore - on grounds that their presence undermines national sovereignty and laws. They are supposed to provide protection from pirate attacks.