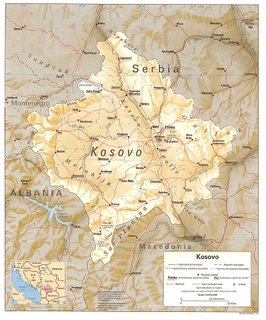 Nice summary of the mess left behind by the Kosovo intervention in The American Spectator here. Hatred, poverty and stupidity are not good foundations for a country.

Kosovo is an unpleasant bit of unfinished business that the West would prefer to forget. A fair and sensible resolution is well nigh impossible, especially since the behavior of Washington and NATO has been truly disgraceful. Far from creating a tolerant democracy, the allies have presided over one of the largest episodes of ethnic cleansing in the Balkans. And if the U.S. continues on its present course, virtually everyone expects the ethnic majority to complete the job in just a few more years, if that long.

Like most of the Balkans, the problem of Kosovo goes back centuries. Serbian identity is rooted in both Kosovo's military history, particularly the 1389 defeat by the Turks in the Battle of the Blackbirds, and spiritual significance, represented by ancient churches and monasteries.
***
In any case, Western officials, starting with American Secretary of State Madeleine Albright, developed policy in a dream world. They thought that a couple days of bombing would bring Belgrade to heel, completely missing the nationalism that animated most Serbs, even democrats and human rights advocates. Worst, the allies believed that they would be able to concoct a multi-ethnic Kosovo in which Albanians and Serbs would join hands singing Kumbaya around communal campfires. In fact, having used their American-supplied air force to eject the Serb military units, the victorious ethnic Albanians saw no need to compromise.

After the war -- under the occupation of the West -- the Albanian community kicked out a quarter million Serbs, Roma, Jews, and non-Albanian Muslims. Over the next five years isolated Serbs were killed, beaten, and kidnapped. Even Serbian enclaves were vulnerable to drive-by shootings.

The U.S. maintains about 1700 troops in Kosovo as part of the 18,000 member KFOR. This somewhat after the "They'll be home by Christmas" deadline set by President Clinton.

The opinion piece does not mention that lives were saved by the intervention, or that the Kosovar Albanian agenda was not "peaceful" coexistence with the Serbs, but rather (1) revenge (and the memories are long in Kosovo) and (2) independence from Serbia (why would you want to be part of a country that had a history of ethnic cleansing against you). The author gets the Plain of Blackbirds (Kosovo Polje) thing right from the Serbian point of view. In 1989, Milosevic held a huge rally there at the big monument to fire up Serbian nationalism.