A map for to assist in understanding the current crisis. 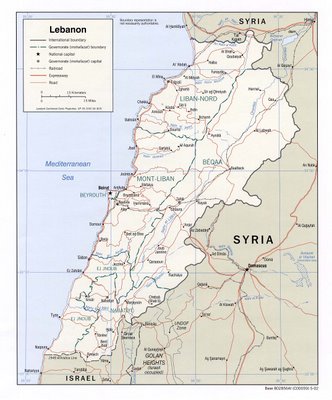 Previous post on the rockets of Hezbollah here. Given that the world has known (or should have known) of the possession of FADJR rockets for 4+ years, it seems surprising that the news reports seem shocked that Haifa is being struck.

What looks like a FADJR-5 sales page. Note comparison in size between FADJR-3 and FDJAR-5: 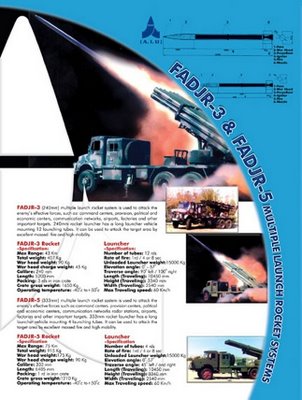 What's surprising about the attack is that Hizballah and/or Iran managed to pull off the strike, despite a heavy Israeli ISR (intelligence, surveillance and reconnaissance) presence. In support of air strikes in Lebanon, the Israelis are using significant numbers of UAVs and intelligence collection aircraft. Yet, these assets failed to detect preparations for the attack, including establishment of firing positions, and (possibly) radar emissions that may have preceded the strike. In most cases, the C802 utilizes a sea surveillance radar for target acquisition, helping the crew sort through local sea traffic. The surveillance radar gives the crew an initial "line of bearing" for launch; once fired, the missile has its own on-board radar to lock onto the target, and guide it to the ship.

If an acquisition radar was used, Israeli ELINT collectors should have detected it, and provided some sort of threat warning to vessels in the area. If an acquisition radar was not used, there's still the question of how Israeli surveillance drones missed the movement of the missile to coastal areas, launcher set-up, and other preparations. While a skilled crew can complete these tasks in only a few minutes, the Israelis pride themselves on their employment of UAVs and ability to maintain persistent surveillance over the battlefield. Obviously, the Israeli ISR system failed on Friday, and there will almost certainly be an inquirty to find out what went wrong. There are a number of potential explanations; in some cases, information developed in ISR channels doesn't always flow to the operators in a timely manner. Additionally, there's the very real possibility that the launcher was effectively concealed prior to the operation, and may have been camouflaged until just before the launch. If that was the case, it would suggest that Hizballah (and the IRGC) are much more adept at camouflage that previously believed.

Friday's missile attacks have clear implications for the U.S. With a non-combatant evacuation operation (NEO) getting underway in Lebanon, U.S. vessels will have to move closer to the Lebanese coast, possibly within range of the C802. American naval vessels are well-equipped to defend themselves against a missile attack, but with the large numbers of U.S. citizens and dependents scheduled for evacuation (25-70,000, by some estimates), commercial vessels--such as cruise ships--may be used. Saying that cruise ships would present an inviting target is an understatement, to say the least. On the other hand, keeping those huge ships out of missile range would mean longer flights for helicopters, and a longer evacuation process.

I note that he uses the phrase "in most cases" to describe the use of a sea surveillance radar to set up a C-802 shot, and I wonder if an exception can be made when there are only a couple of ships in range and if the crew knows at least one of them is a desired target. Instead of lighting them up with radar, I wonder if you can fire the missiles off on a line of bearing and count on its internal guidance system to hit something. Such a "cold" shot might explain the two missile hits, miles apart and one attack being on a commericial ship.

I guess one question that needs to be answered is how crowded the area was with shipping after the Israelis declared an embargo on Lebanon's ports... my theory falls apart if the sea space was crowded.

UPDATE: CDR Salamander has excellent thoughts here and great links on cruise missile defense here. And don't forget to check Sid's input in the comments here and at Salamander's site - well worth the time.

UPDATE2: DefenseTech has some comments on the press coverage of Hezbollah missiles here.
Posted by Mark Tempest at 7/17/2006 09:54:00 AM