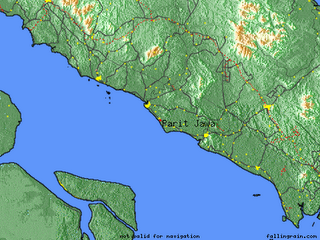 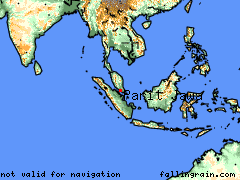 Nervous Malaysian fishermen are staying home, it's reported here, due to fear of pirates:

Some 150 fishermen in Parit Jawa, Muar stopped going to sea, fearing for their safety following rumour of the presence of pirates and criminals in several areas near Malaysian waters.

Parit Jawa Fishermen's Association advisor Chong Chee Seong said that according to the rumour, any fisherman going to sea would face great risk and trouble from the pirates while at sea.

"Widespread rumour of the trouble waiting for the fishermen at sea worries them as it could be real and they are reluctant to take the risk," he told Bernama, here today.
***
He said the Parit Jawa fishermen were often exposed to criminal incidents at sea like their fishing nets being stolen or sabotaged and some even had their boats shot by unidentified parties.

He said marine police did carry out patrols in national waters where the fishermen caught their fish but the pirates usually looked for their prey when the authorities were not around.

Chong said almost all the criminal acts faced by the fishermen at sea were committed by foreigners.

The worst incident took place last year when several of the association members while fishing in national waters, were shot at by foreign fishermen using automatic firearms. One of the fishermen was wounded in the incident.

In a separate incident that took place last year, six Parit Jawa fishermen were captured and made hostage by the foreigners. They were released after paying a RM6,000 ransom.