Sunday Ship History: The Not So Lowly Floating Dry Docks 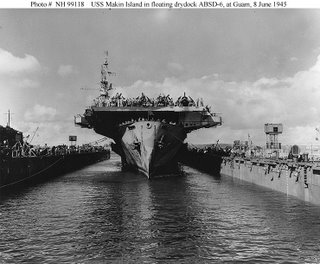 But one weapon was not sleek, dashing or high powered in the least- it just helped speed the war along and allowed more efficient use of the fleet the U.S. did have.

That "weapon" was the "floating drydock." Here's what Fleet Admiral King's Third Report to the Secretary of the Navy said about these drydocks:

An essential element in the facilities of our advance bases were floating drydocks, which were capable of receiving vessels ranging from small craft to the battleship Missouri. One hundred fifty two of these docks were produced. They proved their special value in the speed with which damaged ships could be returned to combat.

In this evolution advance bases have played a vital role. The 1940 Navy had no properly equipped advance bases other than Pearl Harbor. More than 400 have since been established in the Atlantic and Pacific areas in order to maintain the fleet and air forces in the forward areas where there was fighting to be done. As we progressed across the Pacific, islands captured in one amphibious operation were converted into bases which became spring boards for the next advance. These bases were set up for various purposes depending upon the next operation. At first they were mainly air bases for the support of bombers and for the use of protective fighters. This gradually changed to the establishment of staging bases for the anchoring, fueling and refitting of armadas of transports and cargo ships, and for replenishing mobile support squadrons which actually accompanied the combat forces and serviced them at sea. Further advances made necessary the development of repair and refitting bases for large amphibious forces. As we progressed further and further across the Pacific, it became necessary to set up main repair bases for the maintenance, repair and servicing of larger fleet units. The first of such large bases was set up at Espiritu Santo in the New Hebrides and was followed by a main repair base at Manus in the Admiralty Islands. It was then determined that so long as ships were in condition to function in the battle line, minor battle damage and derangements should be rectified in the forward area, thus eliminating the necessity of returning ships to continental bases or even to the Hawaiian Islands.
***
As these bases were gradually pushed forward, assault forces were brought two to five days steaming nearer the enemy. By proper selection of the strategic points necessary to accomplish the advance, we were able to by-pass and ignore many bases established by the Japanese which they could no longer use because their loss of command of the sea.

But for this chain of advance bases the fleet could not have operated in the western reaches of the Pacific without the necessity for many more ships and planes than it actually had. A base to supply or repair a fleet 5000 miles closer to the enemy multiplies the power which can be maintained constantly against him and greatly lessens the problems of supply and repair. ***

There you go- the floating drydocks were part of a system that took the fight to the enemy sooner with great effectiveness. On each of these drydocks were crews that took care of them and helped the U.S. and its allies win the war.

The drydocks were at Pearl Harbor. 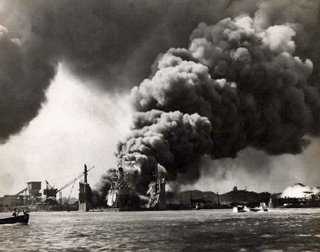 And these drydocks have continued to serve since the war, operating as maintenance facilities for our nuclear submarine force 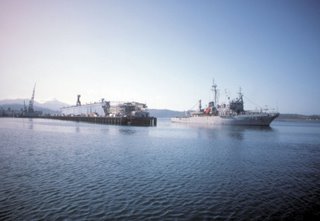 They provided their services to ports overseas, such as Subic Bay in the Philippines, without requiring the investment in fixed drydock capacity which would have had to be abandoned when the Navy withdrew to other areas. When the Navy left Subic, the big drydock from Subic was towed to Guam and put back into use there. 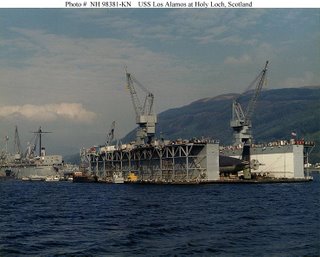 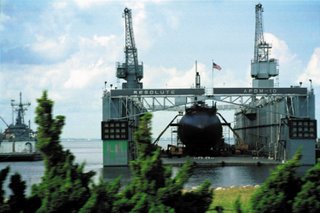 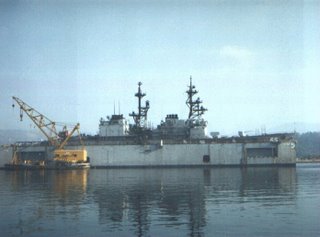 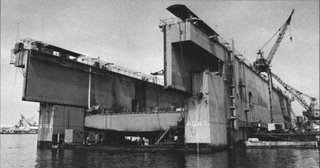 Early in 1961, sections "A", "B", "C", and "D" of AFDB-7 were towed across the Atlantic Ocean to Holy Loch, Scotland, where on 3 March 1961 the Navy established an important base for fleet ballistic submarines. A detachment of Seabees from MCB-4 erected and assembled the four sections. Completed 10 November, the auxiliary floating drydock was placed in service as Los Alamos (AFDB-7).

Assigned to SubRon 14, Los Alamos began drydock service for the FBM boats. Converted for use by submarines, she had the following characteristics: dp. 18,795 (lt.); l. 513'; b. 246'5"; dr. 9'3" (lt.), 67'4" (subm. max.); s. NSP; cpl. 143; a. none. Late in 1961 she carried out her first SSBN drydocking of George Washington (SSBN‑598). Since then, she has served submarines of the "Highland Squadron"at Holy Loch, and in doing so has strengthened the security and defense of the Nation and the free world. She has supported refit and repair operations by submarine tenders Proteus (AS‑19), Hunley (AS-31), and Simon Lake (AS-33). In February 1964 she completed successfully the first "off center" docking of a Polaris submarine. By providing keel bseperateeset for two seperate classes of SSBN boats, Los Alamos "added immeasurably to the site's repair flexibility." Into 1969 she continues to provide docking services for Polaris submarines, whenever needed in weather foul or fair.

Some things we take for granted, but shouldn't.