Aussies take the lead on an important mission as set outhere:

That lifeline is the two oil platforms, Khwar al Amaya Oil Terminal (KAAOT) and Al Basrah Oil Terminal (ABOT), through which $US1billion worth of Iraqi oil is exported each month.

This is more than 80 per cent of Iraq's total export earnings and why they remain critical to the country's economic future.

Their protection is now the primary task of coalition maritime forces in the northern Gulf region, under the command of Australian Commodore Steve Gilmore aboard the US ship Normandy.

It is the first time Australia has headed a coalition task force since World War II.

The mission is to protect the oil platforms and train up the Iraqi navy to enable it to take over.

Sydney-based Commander Sean O'Dwyer says policing the bandits and closing down what he calls "the second oldest profession in the world" is a vital step.

"There has been lots of banditry hits up here," he said. "They come on board with AK47s, knives and sometimes hand grenades. They basically steal stuff and take it to the Basrah markets and sell it."

The last attack was about three weeks ago. 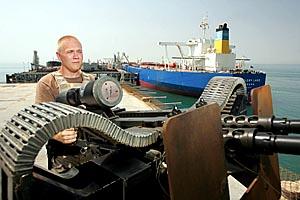 (orignal caption: ON guard . . . a US Marine at the Al Basrah Oil Terminal is armed and ready to prevent sabotage to one of Iraq's two oil platforms that are vital to the country's economic future. Picture: Rob Maccoll.)
Posted by Mark Tempest at 7/24/2005 03:34:00 PM