Australia is concerned about its sea lanes, too.

Australia's sea lanes are at risk. The infiltration of organised crime into piracy has made these incursions more dangerous, more ambitious and harder to stop. But the problem gets worse.

New evidence shows global jihadists are entering the fray. Indeed regional terrorists and insurgents in South-East Asia have a history of using the sea as a launching pad for brutal acts.(source)

However, recent developments have evidently prompted Canberra to pay much closer attention to the possibility of an attack launched by al-Qai'da-inspired terrorists in the southern Philippines against ships carrying billions of dollars of Australian exports to Asia and the US, including tankers laden with liquefied natural gas headed for Japan, South Korea or Taiwan. The destinations will soon include China and the west coast of North America as well.

Almost all of Australia's $153 billion export trade by bulk and about 72 per cent by value is carried in ships. Much of the trade with northeast Asia, the source of five of Australia's top 10 markets, goes through two deepwater passages in Indonesia: the Lombok Strait between the islands of Bali and Lombok, and the Makassar Strait between Borneo and Sulawesi.

Then, depending on their destination, size and weight, the ships either branch right through the Sulawesi Sea south of Mindanao, the main island in the southern Philippines, out into the Philippine Sea and the Pacific Ocean; or they branch left, skirting the Sulu archipelago and Palawan Island in The Philippines to reach the South China Sea.

The Philippine Government sought assistance from the Australian Federal Police after a ferry carrying almost 900 passengers caught fire and sank shortly after leaving Manila for the south in February 2004. A total of 116 people were killed or are still missing, presumed dead. AFP forensic investigators and explosive specialists helped the Philippine authorities confirm that two local terrorist groups linked to al-Qai'da had placed a bomb on the ferry.

Six members of the Abu Sayyaf group and an affiliated organisation known as Rajah Sulaiman were charged with the bombing in October. The Abu Sayyaf is believed to have several hundred members based in the Sulu Archipelago and other parts of the southern Philippines. It has been involved in kidnapping people, including crew members of passing ships, and holding them for ransom. The Rajah Sulaiman group is made up of zealots who have converted to Islam from among The Philippines' Christian majority. (emphasis added)

Major sea lanes for Asia (note there are 2 lines working their way out of Australia toward Japan):

(from Straits, Passages and Chokepoints: A Maritime Petroleum Distribution by Jean-Paul Rodrigue Rodrigue)

This is of direct relevance to Australia’s maritime environment. Noting that Australia is a net exporter of energy, especially coal and raw materials such as iron ore, and a net importer of manufactured goods, it is of vital importance that a true understanding of the role of maritime strategy for Australia is pursued. The Australian economy is absolutely dependent on shipping. Globalisation has meant that Australia’s economy is more integrated with other nations and less self-sufficient. Of our international trade, 99% by bulk and 73.5% by value is carried by ship,2 with about 95% of that in foreign flagged vessels.

In acknowledging the vital role that air transport plays in supplementing seaborne trade, the role of the maritime environment is still relevant. This is because all trade which goes by air flies over the sea and is just as influenced by Australia’s ability to control the sea, as is the overriding proportion which goes by sea. Without control of the maritime environment air services to Australia can also effectively be interdicted, and as a result Australia could be virtually isolated.

Trade is not the only issue that makes Australia a maritime nation. Other important areas that could be targeted by any adversary include tourism, employment and resources, especially offshore oil and gas installations and their supporting infrastructure. Employment and trade are intrinsically linked. One in five jobs in the city and one in four jobs in the country are directly related to the export of goods. Even low level threats against shipping at distance from Australia could have a deleterious impact on costs, which may severely damage Australia’s trading position. These include fuel costs, insurance premiums and time constraints imposed by routing ships by other than the most direct route. Thus, Australian security requires a much broader focus than just conventional invasion through the northern sea-air gap.

And this interesting analysis from Stratfor in 1999:

Australia assumed the congruence of Australian and American strategic interests meant the United States would be forced to intervene in support of the Australian national interest, without involving massive risk and expense by Australia. Australia assumed it was a matter of strategic interest to the United States to guarantee sea lanes through the archipelago. Australia would be the beneficiary of a policy it did not have to underwrite.

In East Timor, John Howard encountered the limits of this assumption. Certainly, the United States has an interest in maintaining secure sea lanes between the Pacific and Indian Oceans. U.S. presence in the Persian Gulf, among other things, depends on that. The United States may have an interest in maintaining sea lanes for the movement of oil from the Persian Gulf to Japan. That does not mean it has an ongoing interest in keeping open sea lanes that are of interest to Australia.

Howard tried to portray his new policy as a tilt toward Asia. He is actually trying to reorient Australian foreign policy in a direction that meshes with the United States... (source)

I think it only works to Austrlia's long-term benefit.

Update: Just a little note on organized crime and piracy - the captain of the MT Nepline Delima was quoted as being concerned about sailing his ship again because "“I am afraid because I heard that land mafias are involved. They can always engage other pirates to attack us. They are plotting to get the diesel..." (source). Not that this is new development... 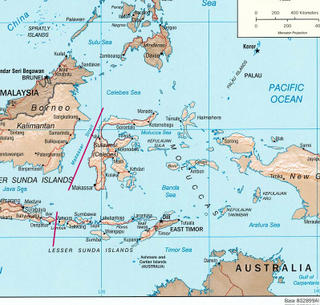