The Straits of Malacca is one of the safest shipping lanes in the world and statements to the contrary are unfounded, said Transport Minister Datuk Seri Chan Kong Choy.

"The figure does not include smaller vessels (below 300 tonnes). If we divide the number of vessels which use the Straits of Malacca every year with the number of cases of piracy, the figure is less than 0.01%," he told reporters after opening the 3rd annual Indian Ocean Research Group (IORG) International Conference at the Legend Hotel here on Monday.

The Lloyd's Market Association's Joint War Committee (JWC) recently declared the Straits of Malacca together with 20 other areas, such as Iraq, Lebanon, and Nigeria, as security threats to shipping.

Update: Further comments point the finger of blame at Indonesia:

Malaysia's maritime fraternity has termed as unfair a decision by an international shipping body calling the vital Straits of Malacca as a high-risk area for war and terrorism, saying though there had been attacks by sea pirates, there has not has been any case of terrorism in the waters so far.
A list issued by the Lloyd's Market Association's Joint War Committee lumped the Straits together with 20 other areas including Iraq, Lebanon and Nigeria, deemed as security threats to shipping.

The Straits of Malacca is one of the most economical routes for vessels plying between Asia and the Indian sub continent, West Asia and Europe.

The move by the Joint War Committee is expected to result in higher insurance costs for shipowners using the sea passageways. The Committee's decision is apparently after a spate of piracy attacks on vessels using the Straits.

President of the Malaysian Maritime Institute Capt Jaffar Lamri said the armed robberies reported in the 600 km sea lane had occurred primarily in Indonesian waters off Northern Sumatra and not the entire stretch of the Straits of Malacca.

"To categorise armed robberies or piracy as equivalent to war and terrorism is unfair to the littoral states," he said.

The direct result of this decision will be to force shipowners to impose additional insurance coverage. This, Capt Lamri said would result in the increase of shipping costs and affect consumers and the Asian region that is currently experiencing tremendous growth.

"The Malaysian goverment, Singapore and Indonesia should protest this declaration not only to Lloyd's but also to the International Maritime Organisation," Lamri said. (emphasis added) 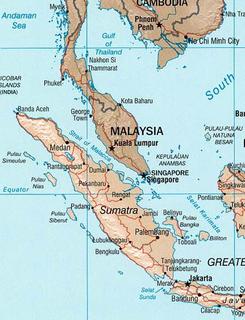 The number of attacks reported worldwide through the IMB Piracy Reporting Centre in Kuala Lumpur was 325, down from the 445 recorded in 2003.

Indonesian waters continue to be the scene of the highest number of attacks, with 93 incidents reported in 2004. While this is down from 121 in 2003, it still accounts for more than one quarter of piratical attacks reported worldwide.

The report said hijackings of tugs and barges and the kidnapping of crew members were on the rise, especially in Indonesian waters, in the Northern Malacca Straits, and off North Sumatra. While in the past these attacks had been thought to be the work of Aceh rebels, there were now increasing signs that crime syndicates are using fishing boats for such attacks. (source)

If you like pictures of where pirate attacks occurred in 2004, go here, or look at this: 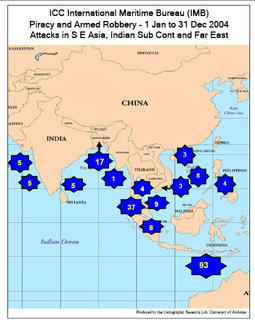