US Coast Guard in Gulf of Guinea

USCG Cutter Bear
What does the 6th Fleet do with a Coast Guard cutter? As reported here, it actually finds a use for it that does not involve following an aircraft carrier around.

The gigantic Gulf of Guinea is the part of the Atlantic southwest of Africa.The Gulf is considered the center of the earth because it is 0 degrees longitude and latitude. (source) 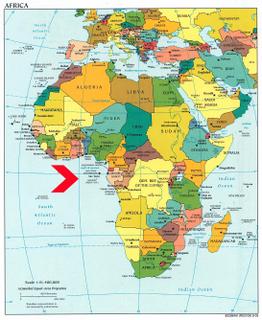 Arrow points to Gulf of Guinea

"Naval operational forces are providing relevant support to the ongoing global war on terrorism throughout Europe and Africa. International cooperation is essential to successfully winning the war against terrorism, and these engagements increase cooperation with regional partners," said Stufflebeem.