Everything old is new again... 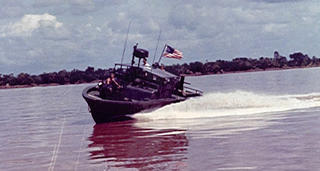 Photo source
Adm. Clark sends out a memo setting out some goals for the modern US Navy (looks like he's convinced that we own the blue water) and CDR Salamander seizes on the new "riverine" force as a cornerstone for his excellent post Back to Brown Water ( and begins or renews a debate with John of Argghhh! on whether river waters are Army or Navy turf. Vietnam and the US Civil war argue for Navy, as does the current underutilization of the Navy while the Army can do it (and well) but why stretch when your neighbor offers you a hand?). Of course, we'll have to reinvent the force since the last riverine remnants may have been traded in for the Inshore Boat Units of the Martime Protection Force Command (MFPC). Jet boats and some good armor. Call RADM Hoffman and the Swift Boat vets for some riverine expertise... a good old idea makes a comeback...

There are lots of good ideas in the memo, beyond the riverine... the Navy needs to get into the Civil Affairs area and adding the CA to the Seabees is a great idea. The Army has had CA in the Special Warfare community and it's heavy in the Army reserves, the Marines do it well when they choose to...having been involved a little with CA during the Kosovo thing, it's something that a large group of Navy reservists (lawyers, mayors, police chiefs, fire chiefs, sewer guys) all would enjoy getting into... and a far better use of their talents and training than, say, writing wills and delivering lectures on the fine art of fitrep writing... The Navy used to be strong in this area and it's good to see it reappear.

AIS stands for Automatic Identification System. It is a shipboard broadcast system that acts like a continuous and autonomous transponder, operating in the VHF maritime band. It allows ships to easily track, identify, and, exchange pertinent navigation information from one another or ashore; for collision avoidance, security and VTS reporting.

AIS technology relies on global navigation systems, navigation sensors, and digital communication equipment (i.e. transponders) operating according to standardized communication protocols that permit the voiceless exchange of navigation information between vessels and shore-side vessel traffic centers. AIS transponders on vessels can broadcast information about the vessel, such as its name or call sign, dimensions, type, position (derived from a global navigation system), course, speed, heading, navigation status and other pertinent navigation data. This information is continually updated, near real-time, and, received by all AIS-equipped stations in its vicinity. The advantage of this automatic exchange of information is that it is accessible to all, tailored to the mariner's needs, and greatly reduces voice radio exchanges.

And that leads into the "data mining" - if it is as defined as:

A class of database applications that look for hidden patterns in a group of data that can be used to predict future behavior. For example, data mining software can help retail companies find customers with common interests. The term is commonly misused to describe software that presents data in new ways. True data mining software doesn't just change the presentation, but actually discovers previously unknown relationships among the data.