More fun on the waters of the world as reported here"

Tbilisi is acting on the international legal premise that there are no territorial waters or maritime borders, other than the Georgian one in this sector. Georgia will continue to detain ships bound for Abkhazia that trespass Georgia's territorial waters without permission or otherwise violate international law. This is a universal obligation for states, including Georgia.

The Abkhaz authorities, however, take the position that Abkhazia has territorial waters and a maritime border. On July 23, Abkhaz de facto president Sergei Bagapsh warned that "Abkhaz forces" would sink Georgian ships if they enter Abkhazia's waters. Abkhaz authorities have abducted 12 Georgians in Abkhaz-controlled territory and offered to release them in a deal for the release of the Turkish captain. After this abduction, it was Bagapsh again who accused Georgia of engaging in "piracy at sea," which he said was incompatible with holding political talks.

Update:Map of area in question: 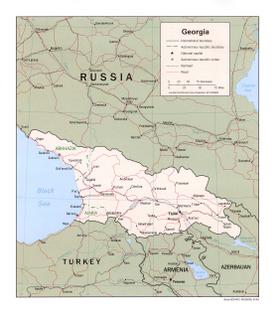