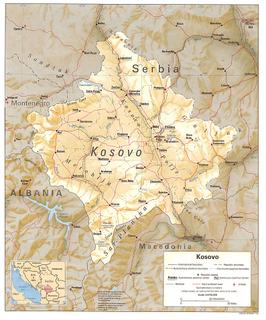 KFOR soldiers, through their sacrifice – and commitment far from home and family - have helped change the face of Kosovo. However, the mission is not completed yet, and I know that there is still much to be done. .

Economic activity is slowing down significantly in Kosovo, as the mainly Albanian-populated southern Serbian territory copes with reduced levels of assistance from Western donor nations.

After growing by more than 3.5 percent last year, Kosovo's economy could actually register a decline in 2005. In its latest projection, the International Monetary Fund says Kosovo's economy will be flat this year and could even decline by .5 percent...Kosovo was always the poorest part of the former Yugoslavia. There was rapid economic growth when donor assistance was pouring into Kosovo, earlier in this decade. But those donations have fallen by half. Mr. Auboin says the cutback in assistance has boosted unemployment.

"[It is] About 30 percent and slightly increasing at the moment because of the flatness in the economy. And, because we have the youngest population in Europe here, massive arrivals in the labor force every year. So this year the economy will not be able to absorb all of the incoming people," said Mr. Auboin.

Some private sector economists say the unemployment rate is closer to 50 percent.

Some experts say the looming cash crisis in Kosovo is likely to be avoided by western donors stepping forward with emergency assistance.

Hey, if your economy is basically gifts from other countries, there is no economy at all. Although General Wes Clark once wrote: "...[I}t is important to remember that Kosovo has already held two democratic elections and developed the foundations of a modern, functioning economy." (see here)

Interviews with a wide variety of current and retired military officials reveal that Clark was disliked by only three groups: Those whom ranked above him in the chain of command whom he ignored, his peers at the same rank whom he lied to, and those serving beneath him whom he micromanaged. Other than that, everyone liked him.(source)

(Also see this which reminds of the fine mind of a Rhodes scholar in operation:

In a speech at the University of Iowa College of Law, on September 19th Clark had declared that chief among America’ mistakes was that it had gone to war in Iraq without “the mantle of authority” bestowed by United Nations approval. But hadn’t the Kosovo war also been conducted without th endorsement of the U.N. Security Council? Yes, Clark allowed, and in that regard the Kosovo war was “technically illegal."