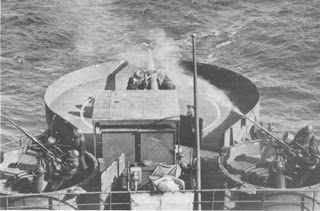 For all of you who have suggested that some sort of armed security force ought to be embarked on merchant ships transiting the Gulf of Aden, at least one military voice agrees, as set out here:

The senior British Royal Navy commander in the Gulf has called for merchant shipping to hire mercenaries in response to the increasing danger of piracy.

At a time when a record number of ships have been hijacked off Somalia, Commodore Keith Winstanley said he believed that the situation has become so serious that civilian vessels should be armed.

He told The Daily Telegraph that private security companies working in Iraq or Afghanistan could be better used guarding ships, which in pirate-infested regions needed a "visual deterrent" such as mounted heavy machine guns.

If his suggestion were adopted, it would be the first time that merchant seamen have been significantly armed since World War II.

So many legal issues involved....

Why are we talking about fending off the pirates instead of taking them out? As noted before:

Some of you may be wondering why the "concerned nations" just don't invade Somalia and take out the pirates. At this stage, my analysis is:

1. Who wants the hassle? It's cheaper to pay ransoms and offer up some ships for patrol than to undertake the invasion.
2. If you did invade, would you end up "owning" the Somalia problem?
3. Everyone has seen or read Blackhawk Down.
4. Quick - name the number of countries that could mount an invasion in force, support troops in the field and sustain the force for an extended period... That country is a little busy right now...

Containment is the alternative to taking over Somalia.