"Piracy That Calls for the Navy's Power" 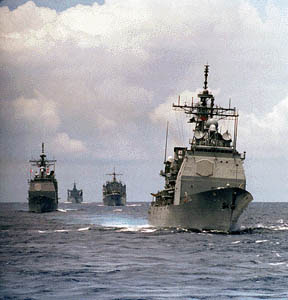 You might have missed a recent letter to the editor of the Washington Post from Charles Dragonette. It was titled: "Piracy That Calls for the Navy's Power". Here it is:

There was one disturbing aspect of the Sept. 27 front-page story "On a Vital Route, a Boom in Piracy," and that is the near-total absence of the Navy in combating Somali pirates in the Gulf of Aden. Not until near the end of the article was the Navy mentioned -- through a Royal Navy spokesman! -- as urging the shipping industry to arm to protect itself. Is this to be our Navy's major contribution?

The Navy, along with the Coast Guard and the Marine Corps, signed on to "A Cooperative Strategy for 21st Century Seapower" in October 2007. This strategy calls for the Navy to "act across the full range of military operations to . . . establish favorable security conditions." It pledges that "[c]redible combat power will be continuously postured in . . . the Arabian Gulf/Indian Ocean to protect our vital interests" and notes, "The creation and maintenance of security at sea is essential to mitigating threats short of war, including piracy."

Piracy is an internationally recognized crime, and the fact that it is being committed, in the case of Somalia, from an ungoverned territory increases rather than lessens the international community's responsibility to act. Has the commander of the Fifth Fleet read this strategy document? Does he believe it?

Long ago, merchant ships armed themselves because there were no warships. Can the world's most powerful navy really mean that merchant ships must now do so, again, because the Navy will not act on their behalf?

I beleive this Mr. Dragonette to once have been called the "authority on piracy" at the Office of Naval Intelligence. If I am correct, Mr. Dragonette was, for years, the contact point for ONI's weekly "Worldwide Threats to Shipping", a regular collection of reports of piracy and other activities detrimental to maritime activities around the globe. He knows what he is writing about.

Others may recall previous letters authored, at least in part, by Mr. Dragonette in response to other published articles on piracy and piracy connections with vital sea lines of communication. Two of these have been noted in this blog before, but are worth bringing back again in light of Mr. Dragonette's recent letter. Both letters were in response to pieces that appeared in Foreign Affairs but both stand mostly on their own and can be found as Lost at Sea (2005) and Dangers at Sea (2007) .

Highlights from the former:

Piracy has clearly not gone away. But no known trade has ceased or even been rerouted because of pirate depredations, nor are insurance costs driven by them. The authors' assertion that the International Maritime Bureau's 445 reported pirate cases account for a bill of $16 billion does not stand up to simple arithmetic. In fact, an eye-watering average of $38 million is lost per incident {NB E1- I think there was an editing error and the rest of this sentence should read something like "if authors' figures were correct"]. Given that most pirate incidents result in the loss of only a ship's stores, the numbers are unsupportable.

And from the latter:

Dennis Blair and Kenneth Lieberthal's argument that the strength and presence of the U.S. Navy guarantee the safety of the world's commercial sea-lanes ("Smooth Sailing," May/June 2007) ignores a basic reality of the maritime domain: threats and actions at sea cannot be assessed in isolation from the shore.

Based on these letters, a couple of things stand out.

First, while true when it was written, the comment that "...no known trade has ceased or even been rerouted because of pirate depredations, nor are insurance costs driven by them" now has been overtaken by events. Insurance rates recently have risen in response to piracy in both the Strait of Malacca and the Gulf of Aden, though the rates for the Strait of Malacca have again decreased due to the stronger anti-piracy enforcement regime established through the cooperation of that strait's littoral states. The insurance rates for the Gulf of Aden now are increasing as the result of the increasing level of attacks by Somali pirates.

Secondly, there now are threats of rerouting ships around Africa to avoid the the sea lane that funnels into and out of the chokepoint of the Strait of Bab el-Mandab. This would require, as Mr. Dragonette states in one letter, more ships:

Losing access to the Suez Canal would dramatically increase the number of hulls required to maintain the same flow of oil. The number of points of vulnerability along sea routes thus means greater pressure on defensive forces such as the U.S. Navy and the navies of U.S. allies.

During the peak of Strait of Malacca piracy, there were discussions of alternative routes, too.

Third, while Mr. Dragonette was addressing the risks posed to vital oil shore facilities when he wrote, "threats and actions at sea cannot be assessed in isolation from the shore," it is a point that bears re-emphasizing with respect to the Somali pirates, and one which I have addressed here. Unless international forces want to invade Somalia and take out the pirate support bases, the only at sea alternative available is to seek to slow down or contain the piracy to minimize its impact on the Gulf of Aden sea line of communication (SLOC).

It is this third point that Mr. Dragonette addresses in his latest letter in his appeal to the most recent U. S. maritime strategy.

There are some important issues behind his frustration. The main issue is the decreasing size of the U.S. combatant fleet, which now consists of only 218 "deployable battle force ships." The "1000 ship U.S. Navy" is a pipe dream.

Only about half of the existent U.S. battle force ships are currently deployed.

There's a lot of ocean out there to be covered by those very few deployed ships.

To make up for this shortfall, part of the U.S. maritime strategy has been to involve other countries in various missions - to create a "1000-ship" global navy to cover matters of mutual interest such as protecting vital sea lines.

This strategy may be working to some degree. The fight against the Somali pirates may be seen as a test of its effectiveness. Recent reports have it that into the Gulf of Aden, the EU is planning to send a small group of ships, the Russians are sending a frigate, the Malaysians a small group of naval vessels, and India discussing a small naval deployment. These deployments make sense as the SLOC in question is important to all those states.

A further issue that is up in the air for the U.S. Navy is whether it even has the right ships to engage in a war against pirates who operate in small, open boats and stolen fishing boat "mother ships."

Using a high tech billion dollar plus cruiser or 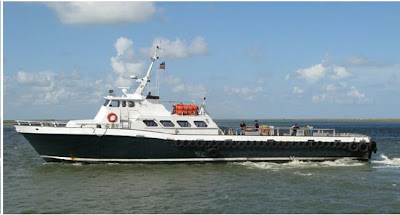 destroyer that can engage dozen of air and surface targets seems a bit of an overkill and a waste of national resources. Vertical launch missile systems are not helpful in engaging RPG toting pirates.

At some point in the future there may be some of what are deemed "Littoral Combat Ships" with variable add-on packages for mine warfare or ... whatever. Again, they still seem too much ship and way too complex for the daily grind of approaching fishing boats and meeting the neighbors at sea to learn to sort out who does or doesn't belong in the neighborhood.

We need a friendly, cop on the beat force. We need small ships young lieutenants can command with good, savvy crews. And we need lots of them right now - out there, learning how to fight pirates the old fashioned way.

If I were king, I'd be acquiring some crew boats (update- fast supply vessels and the like) from the Gulf of Mexico , arming them well, and thinking about some sort of tender for supplying food, ammo and repairs. The crew boats have nice flat stern areas for weapons and small boat davits. Some of these boats can sleep 20 and have reasonable galleys. They have air conditioning. Send them to the Gulf of Aden with their tender. Put 10 or 15 of them out there in harm's way with some warriors for crews and see what happens.

Out pirate the pirates.

If it reminds old fogies of Operation Market Time...well, so be it. It also reminds me of the trawlers and other vessels pressed into service during the World Wars. It was a good idea then, it's good idea now.

Thanks, Charlie, for raising the issue.

UPDATE: Head of Suez Canal operations says piracy in Gulf of Aden has had no effect on Suez shipping levels here. Which, with the relatively low rate of attacks to ships passing the canal, is not all that surprising. But...
Posted by Mark Tempest at 10/06/2008 12:02:00 AM