Steeljaw Scribe looks back at flights of the Intruder.

CDR Salamander looks at future razor blades, wondering, in essence, when the Brits will change that song's words to "Rule, Britannia! rule the shaves." Which might be funny except...

Galrahn continues a discussion on the U. S. Navy's shipbuilding program here. He includes links to Chap who links to Salamander who links to SecDef, who has expressed displeasure with reliance on "magic" solutions, when the real world has real, not notional, challenges:

Mr. Gates urged his audience to “look askance at idealized, triumphalist or ethnocentric notions of future conflict that aspire to upend the immutable principles of war.” In particular, he said, do not base a war plan on a bet that “adversaries can be cowed, shocked or awed into submission, instead of being tracked down, hilltop by hilltop, house by house, block by bloody block.”

Starship Troopers is referenced and the connection should be made to T.R. Fehrenbach's famous quote:

You may fly over a land forever; you may bomb it, atomize it, pulverize it and wipe it clean of life--but if you desire to defend it, protect it, and keep it for civilization, you must do this on the ground, the way the Roman legions did, by putting your young men into the mud.

UPDATE: Which reminds me of the short version of my own post on handling the Somali pirates:

The lesson, simply put, is that the complete defeat of pirates requires getting control of their land bases. Navies can support this, but nothing replaces "boots on the ground."

Which means, if the world is unwilling to put young men in the sands of Somalia, the most we can do with navy ships is try to "contain" the pirates. 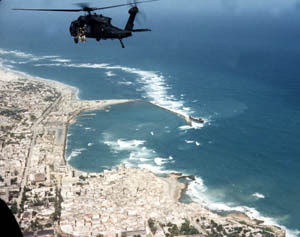 It also reminds me that today begins the 15th anniversary of the Battle of Mogadishu of Blackhawk Down fame. and the results thereof, including bin Laden and al Qaeda coming to believe the U.S. was a "paper tiger." Perhaps you remember how that has ended up...

Chap follows up with another well targeted post that hammers home why the Navy is so hard to change and why it needs it so badly:

We’re even sounding like a broken record in our point/counterpoint arguments about the Navy: Who can disprove this, in a way that a civilian will understand? How did a Navy have influence in this war, or this, since we seem to have decided that piracy is somehow beneath us even though tanks are moving into Africa and pirates are dying mysteriously in ways that caused the Army colonel from Afghanistan I met to clam up and shiver a little? Who’s fighting riverine, and if riverine was relegated to the reserves scavenging boats in ‘02, then NECC was sexy last year, then riverine is zeroed this year, why is that? Heck if I know any of this; we’re still relying on the same critics we had when I enlisted to tell us things we still aren’t following.
***
I recently saw a Proceedings letter complaining about Zumwalt changing haircuts. It’s the freakin’ 21st century and haircuts are still rocking some retired flag’s circumspect little world. HAIR, people. How are you going to change the fundamentals when hair is a forty year battle?

Chap is about ready to go get busy and may be "dark" for some time, but he has not gone gentle into that good bye...

UPDATE2: Piracy maps for the Somalia area and the Gulf of Aden from our friends at the ICC CCS: 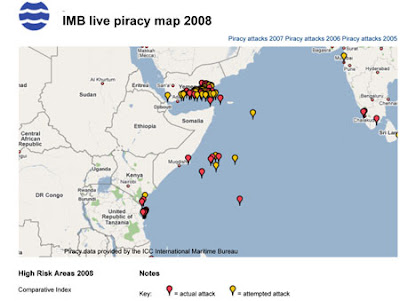 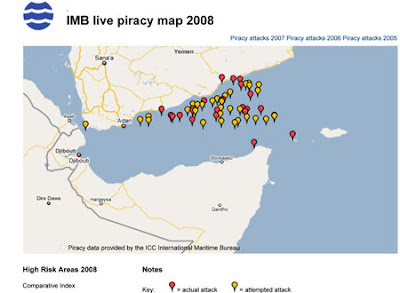