New research puts the number of seafarers held hostage by Somali pirates at a record high. During the month of September, a total of 374 people of all nationalities were held by pirates in Somalia and the highest held at the same time was 339.

In average, highjacked crews in Somalia are held for ransom for five weeks before being released. Two people have been reported dead during September’s piracy spree, one from a gunshot and another from a heart failure.

“Pirates are not interested in killing seafarers indiscriminately, they are interested in obtaining ransoms. For them, piracy is a business, albeit an illicit one. Currently, the evidence is clear - they are unfortunately relatively successful at what they’re doing” –says Mr Hansen.

Recently there have been attempts by some commentators to connect piracy to Islamic militants; however, Risk Intelligence’s research does not support this claim. Also, despite the increased international attention being focused on the problem and the fact that several countries have deployed warships to the area, the risk of piracy in these waters is not expected to decrease in the coming months.

“More warships will have a significant short term effect, but it will not solve the problem. Using MaRisk, we see a clear connection between the instability of the Puntland and Galmudug provinces and the increased number of piracy attempts. To stop or reduce piracy in these areas, we need a long-term solution to Somalia’s ailments; the security problem must be confronted at its source - ashore”, says Hans Tino Hansen.

Mr Hansen further points out that: “Pirates make around one million USD on average for every vessel they seize, which is a far greater financial return than fishing or farming in a country with an average income of 600 USD per year. Thus, we cannot expect these attacks to stop before there is a period of extended domestic stability and economic development, which can only be attained through the imposition of rigorous law and order Somalia.”

Contrary to the main belief the Somali Marines are not connected or based on a single clan but recruits their gunmen from many clans and subsequently also has no allegiance to a single group.
***
We now see 4-5 groups with various skill levels engaged in piracy activities off the coast of Somalia, and with the recent further increase in highjackings and paid ransoms there is a risk that more groups will become active. The main reason for this is on one side the almost total lack of law enforcement in the relevant coastal regions of Somalia combined with the relatively low level of entry barrier to piracy operations: a gang needs 2-3 skiffs, 6-18 gunmen armed with AK74s and RPG7, some sort of communication means – all easily accessible in Somalia.

The brief notes the changing targets of the pirates (from low freeboard vessels to anything that comes into their area) and the relatively good treatment of hostages - their most valuable prize.

Both the press release and the brief note that the ultimate solution to getting rid of the Somali pirates has to do with establishing a secure country of Somalia and that adding additional ships to patrol offshore may slow but not end piracy.

I attempted to make the same point in my post relating to a containment strategy" of the pirates by offshore action.

The EU plan to send more ships, discussed here is to me just a further sign that containment is the goal. Completely halting the piracy, as advocated by Ralph Peters here, would in my view require a hefty invasion force and the willingness to take on Somalia as a long term "nation building" project, a proposition that would prove costly is both blood and dollars. The pirate hunting force proposed by the EU is not even close to what would be required. 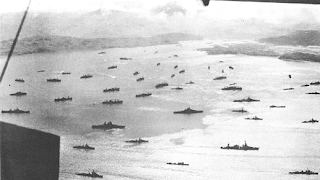 Now, if a major invasion fleet looms up on the horizon, I'll know someone got serious about quashing, rather than limiting these pirates.
Posted by Mark Tempest at 10/02/2008 04:22:00 PM