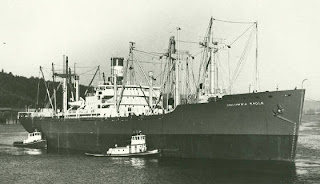 San Francisco is a great city with a magnificent harbor that plays host to an annual "Fleet Week" event during which the sailors of the U.S. Navy bring in ships and aircraft and demonstrate sea power for the public.

Part of the public in San Francisco includes a gaggle of hard core "never got over Vietnam" war protesters, some of whom feel compelled to urge the personnel of the current all voluntary military to throw off the yokes of their oppressors and rise against their officers.

Naturally, there are websites, putting up posts such as "Harass the Brass! Mutiny, Fragging and Desertions in the U.S. Military," chronicling successes in the matters composing its title.

Ironically, the only true shipboard mutiny carried out during the Vietnam War was left off that list. 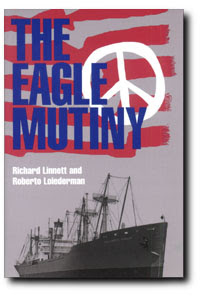 Let us now remember the Mutiny of the Columbia Eagle:

On March 14, 1970, aboard the freighter COLUMBIA EAGLE of the MM&P-contracted Columbia Steamship Co., two crew members pulled guns on the Captain and ordered him to take the ship to Cambodia. 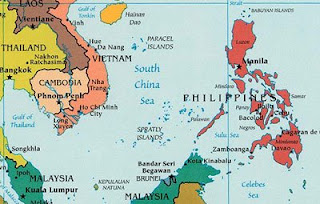 Thus began the first mutiny on board a U.S.-flag vessel in over 100 years. The mutineers - 26 year old Fireman Clyde McKay and his 21 year old accomplice, B.R. Steward Alvin Glatkowski - were seeking to divert the ship and her cargo of bombs and ammunition as a protest against the Vietnam war.

Protest against the U.S. Government took many forms during the Vietnam War, but none was quite as bizarre as what happened on March 14, 1970 when in the first U.S. mutiny in over 150 years, two sailors hijacked the merchant ship, S.S. Columbia Eagle. The boat was loaded with napalm and on its way to deliver to U.S Air Force bases in Thailand when Clyde McKay and Alvin Glatkowski claiming to have a live bomb forced the crew to abandon ship before sailing into Cambodian waters. Once there the men anchored 15 miles off shore where they were soon joined by the naval vessel, Denver and the Coast Guard cutter, Mellon. In a clear case of delusional thinking, the hijackers believed that they would be welcomed with open arms by the Cambodian government. They arrived just as Cambodian ruler, Prince Sihanouk was deposed by a right wing coup. Instead of finding asylum in Cambodia, the men became prisoners of the Phnom Penh regime. Following the incident, a rumor began to circulate that the mutiny was in reality a CIA ruse to deliver weapons to depose Sihanouk. Eventually, Glatkowski was extradited to the United States where he stood trial and was sentenced to prison. McKay escaped before he could be extradited, along with a shadowy deserter named Larry Humphrey. The two men disappeared and more rumors circulated. In November of 1970 both were declared missing and in the ensuing years no information about their fate has been released. In a book about the incident, "The Eagle Mutiny" the authors claim that McKay's remains were discovered and returned to his family in 2005. At the time, the coverage of the hijacking of the Columbia Eagle was skewed. Many newspapers referred to Glatkowski and McKay as "two pill popping and marijuana blowing hippies" to discredit their motives.

The mutineers don't seem to have impressed most regular sailors, as seen in a book review found here titled, "Boneheads of the Sea":

However, in The Eagle Mutiny, two young, and somewhat unstable members of the Seafarers International Union concoct a halfbaked plan to impede the Vietnam War by sabotaging a cargo ship carrying napalm and military supplies.

Leaving the union hall, the men traveled to pier 245J to join the Columbia Eagle.

Built in 1945 at Portland, Oregon, the Columbia Eagle was originally christened the Pierre Victory, and was originally constructed to carry supplies and munitions to Europe and the South Pacific during World War II. After the war, she was eventually purchased by the Columbia Steamship Company, and renamed.

On February 18, 1970, McKay & Glatkowski boarded the Columbia Eagle, and the ship sailed for Southeast Asia on February 19, 1970...two emotionally disturbed young American men, who through their own despair and hopelessness, cause a national and international incident. Their actions also transform the ancient mariners’ motto from the “Brotherhood of the Sea” to a new title for these guys: “Boneheads of the Sea.”

John Hanna* wrote an article for Vietnam magazine (February 2001) about the mutiny. 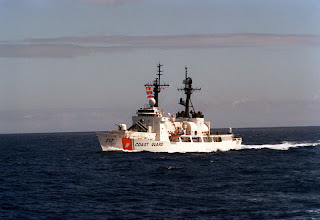 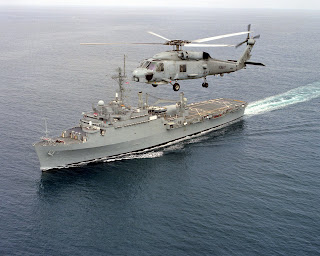 The article can be found here and contains greater detail of the acts of McKay and Glatkowski and of the ship's captain, Donald O. Swann. Before the ship was taken to Cambodian waters, 24 of the 39 member crew were set adrift in life boats. It was their rescue by another ship that allowed notice of the mutiny to be given to the U.S. chain of command.

The U.S. Coast Guard Cutter Mellon was dispatched to follow the hijacked ship, as was USS Denver (LPD-9). As an historical aside, CINCPAC at the time was Admiral John S. McCain, Jr., father of the current Republican candidate for president.

To their credit, members of the crew took action to reclaim their ship but were unsuccessful and told by their skipper to stop trying.

The mutineers' timing was bad, as there had been a coup and the government of Cambodia had been overthrown. Of course, the mutineers had no way of knowing this, but it may have changed their roles from goats into "heroes of the revolution" had they been a couple of months earlier in their mutiny.

In any event, as noted above, there were allegations that the mutiny was staged so as to provide the Cambodian insurgents with weapons. The mutineers asserted at the time the mutiny was tied in with the Students for a Democratic Society (SDS) radical movement (of course, if they were CIA plants, that might have been a logical cover story).

Eventually the ship was returned to the U.S. and sailed to Subic Bay.

The tale gets more tangled after that and I suggest you read the posted pages of the Hanna article.

Photos of Denver and Mellon are of more recent vintage than that of the Columbia Eagle.

*Hanna is a Navy veteran and a civilian mariner. He is also the founder of the original ELF ("the first eco-guerrilla defense unit"). After serving some prison time for ELF actions, Hanna has rejected violence as a means of changing society.