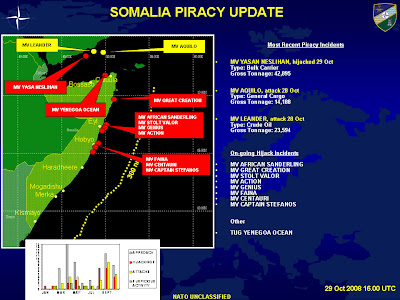 Report of seizure of Turkish ship:

Following a short lull in piracy incidents, possibly due to adverse weather conditions, there has been a very recent surge of incidents. Bulk carrier MV YASA NESLIHAN was hijacked in the Gulf of Aden on 29 October. In addition, two other vessels were attacked andone approached in the Gulf of Aden on 28 October. the total number of commercial vessels (including one tug)hijacked in Somali waters now stands at ten; over 200 merchant seamen are held by pirates.

The NATO Shipping Center reports that the bulk carrier MV Yasa Neslihan was hijacked in the Gulf of Aden on October 29, but gives no details of the incident, The NATO Shipping Center reports the hijacking as part of a very recent surge of incidents in the region following a short lull in piracy incidents, possibly due to adverse weather conditions.

NATO says that two other vessels were attacked and one approached in the Gulf of Aden on October 28, while a U.S. Fifth Fleet/Combined Maritime Forces release puts the number of unsuccessful piracy attempts in the area that day at five.

Separately, the Spanish defense ministry said that a maritime patrol aircraft thwarted a pirate attack on the Panama-flagged oil tanker Leander on Tuesday

The P-3 Orion aircraft received a call for help from the Leander on Tuesday reporting that pirates on two boats were trying to board the vessel which was was about 210 km north of the coast of Somalia.

"To deter the pirates, the plane flew over the hostile boats three times and launched a smoke bomb at them each time," the defense ministry said. "After the third launch, the crew of the P-3 noticed that the boats gave up their attempt to board and separated themselves from the oil tanker."

The aircraft was on a routine patrol when it received the call for help.

Photo of Yasa Neslihan from www.vesseltracker.com.

Five piracy attempts occurred yesterday in the Gulf of Aden; they were all unsuccessful as a result of pro-active measures taken by masters and crews of the commercial shipping vessels.

Even when shots were fired during two of these attacks, the crews of commercial shipping vessels conducted evasive maneuvering and used fire hoses to repel their attackers.

“The pro-active measures taken yesterday by merchant vessels are exactly what we have been recommending,” said Vice Adm. Bill Gortney, Commander, Combined Maritime Forces. “For slightly more than two months the Coalition has been working with the commercial shipping industry and the International Maritime Organization to recommend best practices and leverage lessons learned to employ reasonable self-protection measures. These measures range from proactive lookouts and evasive maneuvering to embarking professional security teams.”
***
Since its establishment, Coalition units have deterred more than two dozen attacks in the Gulf of Aden.

“Piracy is a threat to the security of all nations and requires an international solution,” said Gortney. “The Coalition’s presence is helping deter destabilizing activity, allowing the shipping industry time to implement self-protection measures and the international community to establish a legal framework to hold pirates accountable for their actions.”
***
In addition to Coalition naval forces, ships and aircraft from several other nations to include a NATO task force are operating in the region. While there is no formal agreement between the Coalition and other navies, they have been communicating with each other and sharing information to more effectively patrol the area.