The Malaysian-registered ship, the MV Sin Huat was under way from Singapore to Sibu, Sarawak on 4 October 2008. At 0050 hrs on 4 October 2008, the ship was at 01° 12.5' N, 103° 54.5' E (approximately 2 nm east of Batu Berhanti buoy) in the east bound lane of the Straits of Singapore when three masked robbers armed with parangs (long knives) boarded the ship from a speed boat. Please refer to approximate location of ship below.

The robbers damaged the VHF handset, stole the ship master’s computer and cash, and the crew’s personal belongings before escaping. No crew was injured. The ship master reported the incident to the Singapore’s Port Operations Control Centre (POCC)... 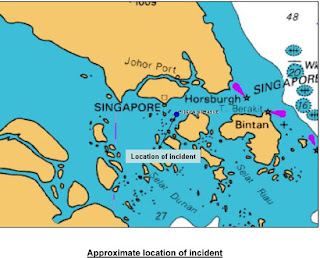 The latest attack on a tug and barge off Pulau Tioman on the east coast of peninsular Malaysia saw a change in tactics with the pirates taking both craft to Thailand.
According to the ReCAAP Information Sharing Centre, on Sept 7, the tug boat Whale 7 was towing Singapore-registered barge Sinobest 2503 from Singapore to Sattahip, Thailand, when three speed boats approached them around 8.30 pm about 12 nautical miles north of Pulau Tioman.
The 15 robbers boarded the tug boat and tied up all seven members of the crew and subsequently abandoned them on a remote beach on Pulau Tioman. The crew were unharmed and were later repatriated to Singapore.
The tug boat owner reported the hijacking incident to the Singapore Port Operation Control Centre (POCC) which is also the ReCAAP Focal Point for Singapore. This was transmitted to the ReCAAP Information Sharing Centre (ISC) and all the other Focal Points in the network. The owner also reported the incident to the Maritime Rescue Coordinating Centre at Putra Jaya, Malaysia. According to the ship company's tracking system, the tug was heading in a northerly direction after the robbers had boarded the tug.
The Singapore Focal Point sent out broadcasts to all ships about the incident, classified as a Category 1 or very significant incident, and ships operating in the vicinity were asked to keep a lookout for the missing tug boat and barge. The Malaysian Maritime Enforcement Agency also provided updates of the incident to the ReCAAP ISC, saying that the hijacked boat might have been brought to Thailand.
The ReCAAP ISC alerted the Royal Thai Navy, which is the ReCAAP Focal Point for Thailand, to look out for the tug and barge.
On Sept 24, Thai Marine Police captured a tug boat named Saga 01 and a barge, Sinoveht 2503. They discovered that the Saga 01 had the same IMO number as Whale 7.
Thai Marine Police reported that five robbers were arrested about seven miles off Prajuabkirikahn Province, Thailand. The robbers revealed that they had been paid 1.2 million baht (S$51,000) to take the tug boat and barge to Ko Chang, Trad Province, Thailand.

General area of attack, "A" marks the more likely area. 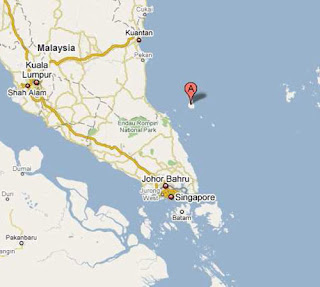 Email ThisBlogThis!Share to TwitterShare to FacebookShare to Pinterest
Labels: Pirates, Strait of Singapore