The EU will send a dedicated anti-pirate force to the waters off Somalia as reported in EU Defense Ministers Agree on Anti-Piracy Mission off Somalia:

EU ministers have committed to launch a joint maritime convoy operation off Somalia, where pirates have increased attacks on commercial vessels. Germany would send one frigate, said Defense Minister Franz-Josef Jung. French Defense Minister Herve Morin announced that the anti-piracy security operation could begin as soon as next month in the wake of calls from Somali President Abdullahi Yusuf Ahmed for the international community to combat rising piracy off the lawless nation's waters. "There is very broad European willingness. Many countries want to take part. Ten have clearly given their accord to take part in such a mission," Morin said Wednesday, Oct. 1, at the meeting in the French seaside resort of Deauville. "We have given a mandate (to EU top brass) to continue the planning for the launch of this operation in the month of November," he told reporters. "We will see what means, NATO and European, can be added." Belgium, Cyprus, France, Germany, Lithuania, the Netherlands, Spain, Sweden and possibly Britain would be involved in the task force, Morin said. "We have to coordinate between the ships that are in the zone and those we are going to send," he said, and added that NATO countries, particularly the United States, had vessels in the area. Germany has agreed to provide a frigate for the EU naval task force, which will include three frigates, a supply ship and three maritime surveillance ships, Defense Minister Franz-Josef Jung said at the meeting.

CTF-150, the current international naval forces in the area has 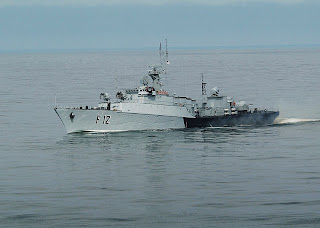 anti-piracy action as a secondary mission, with its primary mission being anit-terrorism and sea control.