The U.S. Navy's Office of Naval Intelligence's Worldwide Threat to Shipping Report (to 24 Oct 08) can be found here. Repeated from earlier reports is this analysis of the pattern of the Somali pirates:

ONI SPECIAL PIRACY ANALYSIS: GULF OF ADEN. The volume of recent Gulf of Aden piracy has allowed the Office of Naval Intelligence to determine factors that represent maximum risk of becoming a hijack victim. Of these, vessel speed at time of attack and time of day are the most significant. Analysis over a two month reporting period included 21 incidents representing both firing incidents and vessel seizure. Suspicious approach incidents that did not involve gunfire were not used in this risk quantification process.

Attacks over the study period occurred in clusters east of longitude 046 degrees 38 minutes east and west of longitude 050 degrees 32 minutes east. Attack activity within these boundaries is likely due to a combination of factors that impact small boat operations such as currents, prevailing winds, sea state, and distance from pirate staging areas.

In addition to increasing standard anti-piracy precautions, all vessels are advised to proceed through the entire Gulf of Aden at maximum possible speed. Vessels with characteristics that put them at higher risk, like maximum speeds of 15 knots or less, as well as those with low freeboard, are advised to minimize risk by transiting as much as possible of the eastern Gulf of Aden in hours of darkness (ONI).

Got that? Point Number 1: Low speed daylight transits of the Gulf of Aden by ships with low freeboard put those ships at risk and should be avoided.

8. GULF OF ADEN: The European Union (EU) commenced military-led convoys of merchant vessels across the Gulf of Aden the week of 06 Oct 08 according to the EU’s piracy chief. French Navy corvettes will shuttle across the pirate-infested waters in the hope that their presence acts as a deterrent, Captain Andres Breijo told Lloyd’s List. The Brussels-based piracy ‘cell’ which Cap Breijo heads will inform shipowners of the position and departure times of the vessels via their national shipowners’ associations, inviting them to take the same route. The operation is not, strictly speaking, a convoy, according to naval terminology, he said, as the term implies that the commanding officer has the authority to change course and speed, which is not the case. It is nevertheless the first sign that EU countries are willing to escort shipping in the area on a regular basis. A Spanish reconnaissance aircraft is also in operation. The two-ship
vanguard should be expanded when the EU naval force now being assembled is sent to the region - ten countries have said they are willing to take part in the force. It is expected in the Gulf by the end of the year. In the meantime, the corvettes will shuttle east-west and west-east, with at least one of the two at sea at all times. Joining a convoy was “no guarantee” against attack, Capt Breijo said. A total guarantee would require a security team on board every vessel in addition to an escort, which is impossible given that up to 30,000 ships a year use the route. But pirates in the region have until now shown no desire to mount an attack in the presence of a
navy vessel, he said. Ships from non-EU navies could also eventually take part in the operation.
(LL, 06 Oct 08 reporting)

Point Number 2: If you can't avoid daylight low speed transits of the Gulf of Aden, follow in the wake of, or otherwise connect with, the EU escort service.

The ICC CCS also continues to post photos of what it says are suspected Somali pirate "mother ships" operating in the Gulf of Aden: 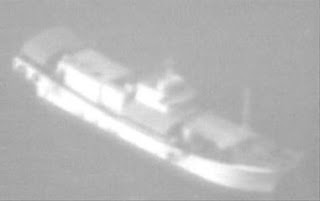 Email ThisBlogThis!Share to TwitterShare to FacebookShare to Pinterest
Labels: Pirates, Threats to Shipping