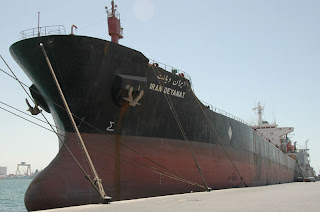 Iran doesn't like Somali pirates and is directing its ships to take precaution to prevent their seizure in the Gulf of Aden, as set out here:

Iran's main shipping firm has told its vessels to install barbed wire on their decks and put crew on watch against pirates in the Gulf of Aden, it said on Wednesday.

Of more interest to some will be the report on the Iranian "mystery" ship Deyanat which has been touted as everything from an Iranian vessel carrying weapons to Eritrea to a potential weapon of mass destruction to be used against Israel (a subject about which I receive frequent emails). According to the news report:

The bulk carrier Iran Deyanat, owned by Islamic Republic of Iran Shipping Lines (IRISL), was hijacked on Aug. 21, one of numerous ships hijacked by pirates in the waters off the Horn of Africa. It was freed on Oct. 10.
***
One report suggested the Iran Deyanat had been carrying arms to Eritrea, and a Kenyan-based shipping organisation suggested the ship was carrying a "dangerous chemical" that had injured and killed Somali pirates.

IRISL denied both allegations in a statement on Wednesday. It said the Iran Deyanat had sailed to Salalah, Oman, after its release and was now in the Mediterranean, heading to Rotterdam.

"The cargo was loaded in China under normal circumstances and there is no danger associated with it," IRISL said.

"We didn't go to Eritrea with any weapons," Captain Majid Ensan Najib of IRISL told Reuters.

Najib, the head of IRISL's maritime affairs department and emergency response committee, who was involved in Iran Deyanat's release, said the ship's manifest had listed only minerals and industrial goods, not chemicals or arms.

Mystery cargo? Start your own rumor. Let's follow the ship to Rotterdam.