How 'bout that Jack Davis 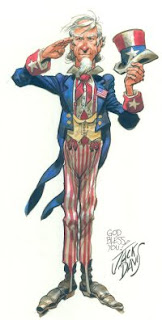 Jeff Bacon of Broadside highlights one of the great cartoonists in his salute to Jack Davis:

You have seen his work in many different venues - in comic books, magazine covers, advertising illustrations (the list of clients reads like a Fortune 500 table of contents), and was there at the very beginning with MAD Magazine. It was during his MAD years that Jack’s art became known to most of us. His ability to combine the accuracy of Norman Rockwell with a flare for humorous caricature made him famous and inspired a generation of young artists.

But it is his philanthropy that has touched me the most. An unblinking patriot, Jack has donated art to many military organizations, refusing to take a dime for his efforts. His illustrations of Uncle Sam have been distributed to wounded soldiers at Brooke Army Medical Center, Walter Reed and Bethesda and at VA hospitals around the country - he signed each one individually.

As a law school grad of the University of Georgia and a fan of Mad magazine, I have long admired Mr. Davis's work. There is much more to admire in his character.
Posted by Mark Tempest at 10/04/2008 03:45:00 PM