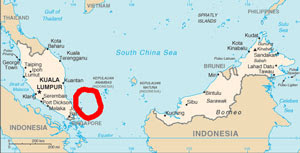 Reported as Pirates attack two vessels in South China Sea and by ReCAAP: 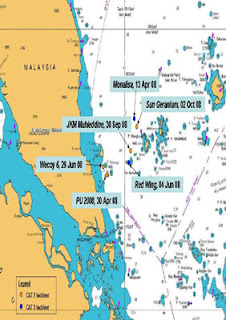 Although there is no conclusive evidence as yet, it appears that the same group of pirates was probably involved in the two incidents that occurred in the South China Sea on 30 September 2008 and 2 October 2008.

The ReCAAP ISC notes that these were the fifth and sixth incidents that have occurred in the South China Sea area since January 2008.

UPDATE: ReCAAP is the Regional Cooperation Agreement on Combating Piracy and Armed Robbery in Asia (ReCAAP). Background here.
Posted by Mark Tempest at 10/02/2008 06:47:00 AM