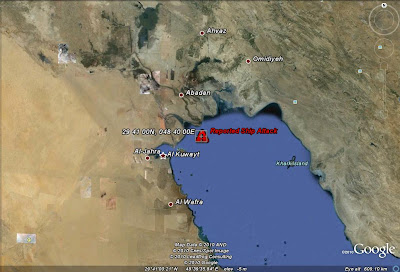 Unconfirmed early report of an attack on a merchant ship in the the NAG/Northern Persian Gulf:


Merchant Vessel attacked in position 2941N 04840E. DTG 083030LT Aug10. Vessels are warned that if passing within 100nm of this area they are to exercise extreme caution.

That's up near Iraq if I plot it correctly.

More details as I get them.

UPDATE: Sea robbers? Yes, if the attacks described here are the same as the above (again, unconfirmed):

The attackers targeted the Antigua-flagged Arminia, North Korea's Crystal Wave, Syria's Sana Star and the American ship Sagamore last Sunday and took personal belongings from the crews, Lieutenant John Fage of the U.S. Navy's Fifth Fleet said.
***
The ship robberies took place about 145 km (90 miles) from the port at Basra, one of Iraq's largest cities and the heart of the oil industry.

Iraq is counting on oil sales, which provide about 95 percent of federal revenues, to supply the billions of dollars needed to rebuild after years of war, international sanctions and economic decline.

The attacks did not qualify as piracy under the U.N. Convention on the Law of the Sea because they took place in Iraqi regional waters and not on the high seas.