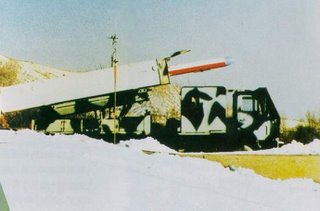 Along with the Harpoon, the C-802 is considered one of the most effective antiship missiles in the world, and experts are quick to point out the significance of such a capability in the hands of terrorists.

“I think because [the attack on Hanit] was seen as an isolated incident, people think it is some kind of fluke, or they got lucky, or there was just one,” said Guy Ben-Ari, a fellow at the Center for Strategic and International Studies. “I don’t think that’s the case.”

“I think it’s anybody’s guess how many there are out there,” he said. “If they can operate one or two successfully, they can operate many successfully. If they target an Israeli ship one day, they can target an American ship.”
***
I don’t believe there are any Navy captains that believe they can’t protect their ships,” said Jim Wolf, program director for Phalanx Systems at Raytheon. “I think the Navy is fully capable to handle anything that might come its way.”

Without going into details, Cothron said there would be logical changes to force protection schemes in light of the Hanit attack.

“There certainly is awareness that this type of capability is there that wasn’t there before,” he said. “So commanders of all navies and merchant ship captains in the area will make changes that are appropriate to their own capabilities and based on their mission.”