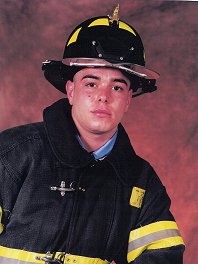 From the hymn, "How Firm a Foundation",

When through fiery trials thy pathways shall lie,
My grace, all sufficient, shall be thy supply;
The flame shall not hurt thee; I only design
Thy dross to consume, and thy gold to refine.

The youngest of the bravest, part of that band of men who ran into danger to save others.

Michael F. Cammarata was a New York City firefighter from Staten Island, at 22 the youngest firefighter to die in the September 11, 2001 Terrorist Attack. After scoring a perfect score on the written and physical exams, he was sworn in as a firefighter and assigned to Ladder Company 11 on East Second Street in June, 2001. His fellow firefighters called him "The Face" for his good looks.

His remains were not found by the time of his funeral on June 7, 2003. A vial of his donated blood was buried with personal effects.

At the funeral Mayor Michael Bloomberg said that rescue personnel should be particularly identified in any memorial, so that any visitor "be able to read their names, know what they did, appreciate their heroism, be inspired by their sacrifice and ensure they are designated as role models for the next generation who will protect us all."

Michael Cammarata has been honored by Little League International by having the number he wore in the 1991 Little League World Series (while playing for Staten Island) placed on the right field wall of the stadiums in which the Series is played:

“Michael Cammarata’s willingness to sacrifice his own safety for the safety of others made him the very embodiment of all three words in the Little League motto: character, courage and loyalty,” Stephen D. Keener, Little League Baseball and Softball president and chief executive officer, said. “In the years to come, people will ask, ‘What is the No. 11 in right field for?’ We will be able to tell them the story of a Little Leaguer who became a true hero for all of us.”