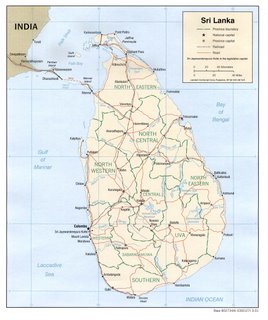 Sri Lanka's navy and air force in a joint operation destroyed and sank a large vessel believed to be carrying weapons and ammunition for Tamil rebels, killing an unspecified number onboard, a defence ministry spokesman said Sunday. The vessel was destroyed 100 nautical miles off the coastal town of Kalmunai, 240 kilometres east of the capital, on Sunday after those onboard failed to respond to warnings by the navy, the spokesman said.

Large quantities of weapons and ammunition, including artillery, were believed to be onboard the vessel when it was destroyed, the spokesman said.
***
Tamil rebels and government troops have been fighting each other during the past 10 months in the north and eastern parts of Sri Lanka, leaving over 2,000 from both sides as well as civilians dead while prospects of reopening peace talks under a Norwegian backed peace process have been diminishing.

More here from the Sri Lankan government point of view:

The vessel sailing in deep seas around one hundred nautical miles off Kalmunai without a flag was detected by the Navy around 7.30 a.m. today. The ship had completely ignored the warning shots fired by the Navy patrol craft to stop. Instead the vessel had opened fire towards the Navy craft. Subsequently the Navy with the assistance of the Air Force destroyed and sunk the suspected vessel.