Port of Oakland gets no respect (and SF,too) 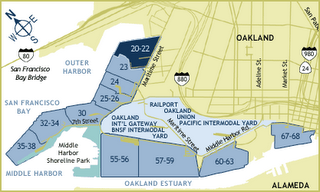 Poor Oakland, California. Slammed by native Gertrude Stein ("The trouble with Oakland is that when you get there, there isn't any there there."), host to the formerly proud Raiders whose silver and black colors have besome symbols of futility.

Even the A's are ripped by baseball fans for the inability of the team to win in the playoffs.

But now, shortly after the Port of New York/NJ whines ints way into millions, the Port of Oakland, the nation's fourth largest container port learns that it will receive nothing -nada- zip- zero-nil- in the way of Homeland Security funds. According to an article found on the Cargonews Asia site:

The Port of Oakland asked for US$6 million this year to help guard against terrorist attacks, but the federal Department of Homeland Security (DHS) said the nation's fourth-largest container port will get nothing.

While the Bay Area's various transit agencies received $11.2 million from a $400 million transportation grant programme, the ports of San Francisco and Oakland were left out in the cold.

"We are a little bit puzzled about how the decisions were made,'' said Marilyn Sandifur, spokeswoman for the Port of Oakland. "We're very disappointed.''

The port wanted the money to pay for security projects totalling $8 million. The port, which got $2.9 million last year, would have spent the money on a system to better track employees and trucks inside its gates, better detect intruders and make communication improvements, Sandifur said.

Funding was awarded for specific projects based on a port's "relative risk'' of being attacked and how well the projects meshed with federal security priorities, but department spokeswoman Joanna Gonzalez did not know why San Francisco and Oakland were skipped over.

The announcement added to a string of woes for Bay Area agencies over homeland security funding. In June, the federal agency awarded the region $28.3 million under an urban security grant -- $5 million less than the prior year and far short of the $333 million that Bay Area cities sought under a joint application.

Security officials figured on more, not less, funding after Homeland Security Secretary Michael Chertoff pledged a new formula based on a complex calculation of threats rather than population or politics.

A report this year from the Public Policy Institute of California found that California's largest seaports received just 19 percent of federal port security grant funds, despite handling 40 percent of all containers coming through US ports.