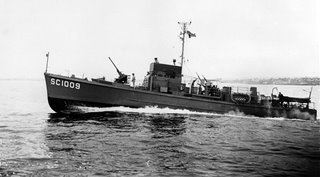 In the early days of the US involvement in WWII, Germany's submarine attacks off the US East Coast took an awful toll:

As set out at Ted R. Treadwell's excellent "Splinter Fleet" site, the US met the need by revising a WWI idea - the "subchaser" which early in the war were made of wood:

Subchasers (also called “submarine chasers”) were built and launched in great haste at the outset of World War II because German U boats were roaming the Atlantic at will, unopposed, sinking merchant vessels with complete abandon with no regard for neutrality. They were doing this at an alarming rate. Tens of thousands of tons of valuable cargo were being sunk almost daily, some within sight of our shores. The Germans were so bold and aggressive their U boats even landed counteragents on beaches in Maine and in Florida. In the summer of 1942 U boats sank more ships and took more lives than were lost at Pearl Harbor. Most American citizens were unaware of the seriousness of our situation, but the navy knew, and the U boat menace became our navy’s #1 priority even at the cost of delaying our response to the Japanese aggression in the Pacific.

The U.S. navy had been virtually destroyed at Pearl Harbor. On the entire east coast we had only one bona fide antisubmarine vessel. Something had to be done quickly to stop the U boats. The big shipyards were backed up with contracts for building carriers, cruisers and destroyers and steel was allocated for these as well as tanks, guns and many other military devices.

Subchasers could be built of wood in small boatyards on both coasts and the Great Lakes and Gulf regions. They could be built fairly quickly (60 to 120 days depending on availability of materials and components) by craftsmen who knew how to build wooden boats. Many of the boatyards were small, family-owned businesses, only a few of which exist today. The navy wasted no time letting out contracts to fifty such boat yards. By the time the war ended 438 wooden SC subchasers had been launched and commissioned.

How well did they fare? A graph of their history here. And a transcription from the Dictionary of American Naval Fighting Ships:

Subchasers became operational in quantity during 1943 and 1944. Although the sinking of only one submarine was verified, they were effective in helping to curb the U-boat menace along the east coast and in the Caribbean. Their contribution was felt more in the deterrent effect they had upon the operations of patrolling U-boats than in their tally of kills. The submarine of this period was capable of only limited submerged cruising at low speed, and the extensive patrolling by SC's and other ships and aircraft forced U-boats to spend much more of their patrol time beneath the surface, thus exhausting their batteries and reducing their effectiveness.

By the end of the war, some 450 SC's had been built, and 37 more were canceled as the need for such craft waned. Of those completed, about 200 were transferred to Allied navies under Lend-Lease. Eight CC's were reconfigured as motor gunboats and re designated PGM 1 through 8. Armed with light guns and automatic weapons and later fitted with rocket launchers, they were introduced in the Southwest Pacific theater early in 1944 to patrol against Japanese barge and small craft traffic. Thirty five more SC's were modified to Control Submarine Chasers (SC(C), retaining their original hull numbers. These were used as communications-relay craft and for "traffic control" of landing craft during amphibious operations. A "reverse Lend-Lease" element was introduced in 1942. To help alleviate the critical shortage of antisubmarine ships and craft, a number of vessels were transferred to the United States by the Royal Navy. Among these were eight Canadian built "Fairmile B" class craft, classified as Motor Launches by the British. These fitted neatly into the American submarine chaser category, so they sere numbered in the same series as the 110 footers, becoming the SC-1466 class.
***
World War II expansion programs led to construction of two large groups of subchasers, the new 110 foot wooden hulled craft and the 173 foot steel hulled type. By 1943, it was felt desirable to differentiate between the two types. The symbol PC was retained for the steel 173 footers, and the separate symbol SC was adopted for the 110 foot vessels. These now dropped the dual "S.C.-PC" identification, and were simply identified as "USS SC-." As noted earlier, some SCs were later modified for amphibious control work and re designated SC (C), retaining the same numbers. Several types of patrol craft, including PC, SC, PCE, and PCE (R), were given numbers from the same general numerical series, explaining the gaps the in the number sequence for SCs.

While the majority of the SC/PC ships served well, at least one, PC-815, is famous for other reasons, as set out here, including the command stint of Lt L. Ron Hubbard, later the founder of the Church of Scientology. Hubbard's experience ended when he was relieved for cause for, among other things, possibly shooting onto Mexican territory (about which, much more here). PC-815 was later rammed and sunk by USS Laffey at the entrance to San Diego harbor.

Others of the PCs performed well:

PCs were highly effective in protecting convoys along the Atlantic seaboard, in the Caribbean and South Atlantic during the critical 1942-1943 "Battle of the Atlantic" years, filling the gap until the Destroyer Escort (DE) could be built and deployed. Though only a few German U-Boats were actually sunk by PCs, their presence, and the threat of depth charge attacks, was a deterrent to the U-Boat commanders. With the threat of submarine attacks on the wane, the PCs took on more hazardous duties, serving in virtually every combat theater around the world.

The PC proved exceptionally adapt as Patrol Control Craft (PCC), controlling and guiding waves of landing craft in every European amphibious landing from Operation Husky, the invasion of Sicily in July 1943, to Operation Overlord, the combined Allied invasion of Normandy on D-Day, June 6, 1944.

In the Pacific, the PCCs were assigned to the Seventh Fleet, "MacArthur's Navy," participating in all island-hopping amphibious landings through Iwo Jima and Okinawa.

During the October 1944 Leyte, central Philippines, landing operations, PCs 623 and 1119, along with five LCI(R)s, distinguished themselves when they rescued approximately 1,200 survivors of USS Gambier Bay (CVE 73), USS Samuel B. Roberts (DE 413), USS Hoel (DD 533) and USS Johnston (DD 557) sunk by Japanese naval forces during the Battle of Leyte Gulf.

Operation Olympic, the invasion of the Japanese home island of Kyushu, was the next big invasion planned for execution in March, 1946. The PCCs had received their beach control assignments and were preparing for the invasion when the war ended in August, 1945.

As testimony to their vital role as control ships, the Japanese had assigned entire squadrons of suicide boats to destroy, or disrupt, the PCCs during future landing operations.

A book on the PCs here.

Others of interest who served on subchasers include Pierre Salinger, President Kennedy's press secretary.
Posted by Mark Tempest at 9/10/2006 10:54:00 AM