Until recently, the number of pirate attacks in the waters off Somalia or in the Malacca Strait appeared to be escalating in both number and in threat level. Instead of simple boardings to rob crew or steal ship supplies, the pirates were beginning to seize entire ships and seek ransom for the ship and crews (Somalia style piracy) or steal the entire cargo and/or the ship for later sale (as happened in some Malacca cases). As I have been commenting on piracy, a couple of readers have suggested that one means of defeating pirates might be the use of "Q-ships." A "Q-ship," for these purposes,being an ostensibly harmless merchant or fishing vessel which, surprise, surprise, is actually a heavy armed ship with enough firepower to overwhelm any attacker and turn the tables, as it were, on would be pirates.

As set out here, Q-ships came into use during World War I:

When the U-boats [German submarines] were at their worst in World War I, the British Admiralty approved and authorized the conversion of merchant vessels to heavily armed raiders which would have her guns disguised or concealed in such a way that the merchant vessels might serve as decoys which would encourage U-boats to attack them. Then, provided the disguised merchant vessel had been given sufficient buoyancy, so that one or two torpedoes would be unable to sink her, the disguise was to be thrown off, the guns brought to bear, the U-boat sunk.

Of course, the key element was surprise:

The entire effectiveness of the enterprise depended on the successful use of surprise, and once the U-boats were aware of the ruse, the chances of success were so greatly reduced that only a few ingenious Commanding Officers were able to conduct Q-ship campaigns throughout the remainder of World War I with any distinction.

For a variety of reasons, the British did not use Q-ships during World War II, but the American Navy, faced with massive losses of commercial shipping off the U.S. East Coast - from January to June 1942, a total of 397 ships were sunk - decided to give Q-ships a try. For an excellent read about this period, I recommend Homer Hickam's Torpedo Junction: U-Boat War Off America's East Coast 1942.

Unfortunately, one of the first of the American Q-ships, USS Atik (AK-101)(top photo) was sunk by a submarine while the Q vessel was on its first cruise after refitting into a warship. The results were set out in the pages of the New York Times:

The next piece of information came from Berlin on April 9, 1942, in the form of a broadcast recorded by the Associated Press in New York. It was printed in the New York Times on the following day, April 10, 1942:

"The High Command said today that a Q-boat--a heavily armed ship disguised as an unarmed vessel--was among 13 vessels sunk off the American Atlantic coast and that it was sent to the bottom by a submarine only after a `bitter battle.' (In the last war, Q-boats accounted for many submarines which slipped up on them thinking they were easy prey. When the submarines came into range, false structures on the Q-boats were collapsed, revealing an array of guns.)"

"The Q-boat, the communique said, 'was of 3,000 tons and was sunk by a torpedo after a battle 'fought partly on the surface with artillery and partly beneath the water with bombs and torpedoes.'"

As the Navy history notes:

So far as United States Q-ships were concerned in World War II, this was the first and the last action with U-boats which produced any positive results. It appears from this unfortunate beginning that the Germans were well aware of Q-ship possibilities; that the element of surprise which had made this type of vessel effective against submarines in World War I had been so completely lost that the Q-ship had become something of an anachronism.

In addition, Q-ship duty was hazardous, as noted in the bibliography of the Navy article (citing Samuel Eliot Morison):

Morison observes that 148 personnel, 1/4 of all personnel involved in the program, died, making it the most hazardous branch of the Navy. 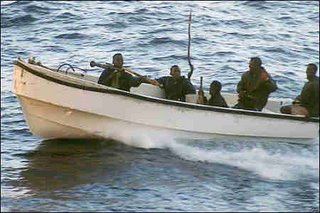 Using a Q-ship for anti-piracy work seems to me to be dubious proposition at best. Having a specially outfitted vessel means the element of surprise might easily be surrendered if the same ship "trawls" the same pirate-infested waters too frequently. Further, these modern pirates use small teams of men in small boats, which may be easily replaced by the "pirate kings" without risk of more expensive ships or the "brains" of the pirate operation. The costs of the operation of an anti-pirate Q-ship would be high, and it difficult to think of any entity that would step up to pay those costs, especially if there are less expensive options, including increasing crew awareness in high risk areas (read the reports- most attempted boardings of ships traveling through the Strait of Malacca are thwarted by alert crews armed with powerful fire hoses). In addition, since many pirate attacks take place in territorial waters, there is the question of having the legal right to respond to what is felt to be an attack while in a state's waters as opposed to being on the high seas. See here.

Some escort services in the Strait of Malacca have caused the adjoining littoral states to assert that the escorts have no right to engage "sea robbers" (the proper term for pirates found inside the waters of a state and not on the high sea). See here. The more popular solution seems to be providing security personnel to ride ships transiting dangerous waters.