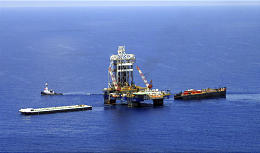 Nothing like deep sea drilling to push the envelope of technology as Chevron did here:

Chevron Corporation reported that it has completed a record setting production test on the Jack #2 well at Walker Ridge Block 758 in the U.S. Gulf of Mexico. The Jack well was completed and tested in 7,000 ft. of water, and more than 20,000 ft. under the sea floor, breaking Chevron's 2004 Tahiti well test record as the deepest successful well test in the Gulf of Mexico. The Jack #2 well was drilled to a total depth of 28,175 ft.
***
More than a half a dozen world records for test equipment pressure, depth, and duration in deepwater were set during the Jack well test. For example, the perforating guns were fired at world record depths and pressures. Additionally, the test tree and other drill stem test tools set world records, helping Chevron and co-owners conduct the deepest extended drill stem test in deepwater Gulf of Mexico history.

Oh, yes, it has the potential to be big: "The announcement claims that the discovery could increase US proven reserves of oil by as much as 50%." But there is good reason to be cautious in such statements, as set out here.

Of course, as a former Chevron employee (and future Chevron pensioner- not that it will increase as a result), I hope it's the "elephant" as reported, but even if it's not, it's still a good thing.