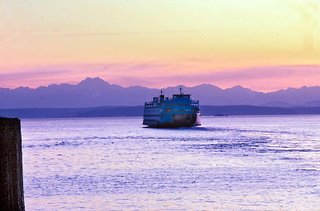 Or terrorists might simply hijack one of Washington state's jumbo ferries with 2,500 people on board and aim it at the Puget Sound Naval Shipyard in Bremerton, which overhauls nuclear aircraft carriers and Trident nuclear submarines.
***
"Intelligence suggests that WSF (the Washington state ferry system) is being monitored and may be a potential terrorist target," according to the documents, which were marked as sensitive but not classified. "Attacks on mass transit systems are increasingly terrorists' choice."
***
"The worst-case scenario is a large truck bomb," Washington State Patrol Lt. Travis Matheson said. But he said attacks could come from the air, the sea or a passenger with a homemade bomb. "The ferries are considered very high risk and they are difficult to protect."

Of course, a lot of the protection falls on the Coast Guard and alert local law enforcement.

Washington is not the only state running ferries. Washington ferries here.

Probably the most famous (and successful) terrorist attack on a ferry was in the Philippines with the Abu Sayyaf attack on Superferry 14:

Superferry 14 was a large ferry destroyed by a bomb on February 27, 2004, killing 116 people in the Philippines' worst terrorist attack.

On that day, the 10,192 ton ferry was sailing out of Manila, with about 900 passengers and crew. A television set filled with 8 lb (4 kg) of TNT had been placed on board. 90 minutes out of port, the bomb exploded. 63 people were killed immediately, and 53 were missing and presumed dead. 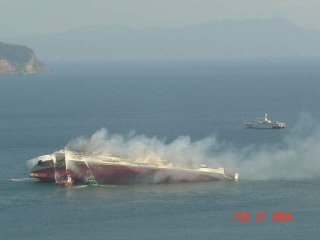 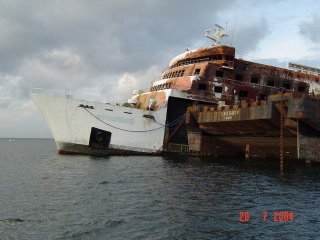 UPDATE: A sort of related warning regarding railroads and "toxic cargo" here.

UPDATE2: An older piece on the Washington ferries here.
UPDATE3: Concerns in Australia:

Ferries on Sydney harbour are in imminent danger from terrorist attack, an American security consultant has warned the Australian Security Industry Association conference.

"And they're already perilously close to sea level," he told the Daily Grind.

"If six ferries blow up mid harbour, how are you going to get everyone off… the bottom of the Harbour Bridge?"

"It should be part of the city's disaster plan."

Large passenger ferries, such as the ones that carry citizens between Manhattan and Staten Island, New York, pose the greatest risk of terrorism in maritime transportation, the U.S. Coast Guard and Department of Homeland Security warn.
According to a Coast Guard study, large ferries received the highest risk assessment score among 80 maritime terrorist scenarios, tying with a ship carrying hazardous cargo near an urban area. DHS has also issued a bulletin warning that terrorists are scouting U.S. ferry systems for possible attack.
There are two U.S. ferry systems considered "large" by the Coast Guard: The Staten Island ferry system and the Washington State Ferry -- each system includes boats that carry more than 2,000 people.