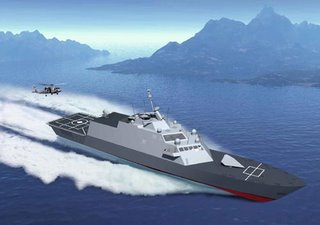 As set out here, the first Littoral Combat Ship Freedom will be christened on September 23.

Freedom is the first of two LCS seaframes being produced. Freedom is an innovative combatant designed to operate quickly in shallow water environments to counter challenging threats in coastal regions, specifically mines, submarines and fast surface craft. The LCS is capable of speeds in excess of 40 knots and can operate in water less than 20 feet deep.

Freedom will be manned by one of two rotational crews, blue and gold, similar to the rotational crews assigned to Trident submarines. The crews will be augmented by one of three mission package crews during focused mission assignments. The blue crew commanding officer is Cmdr. Donald Gabrielson, who was born in northern Minnesota and graduated from the U.S. Naval Academy in 1989. The gold crew commanding officer is Cmdr. Michael Doran, who was born in Harrisonville, Mo., and graduated from Villanova University in 1989. Upon the ship�s commissioning in 2007, Freedom will be homeported at Naval Station San Diego.

Also, news of one of the weapon systems to be available to the LCS class ships here:

Navy and Army officials held a contract signing ceremony at the Army’s Redstone Arsenal in Huntsville, Ala. Aug. 28 to signify the cooperation between the services in the joint procurement of the Netfires Non-Line-of-Sight Launch System (NLOS-LS). The Navy is procuring the NLOS-LS for use on Littoral Combat Ship (LCS) surface warfare mission module.

"The NLOS-LS system brings considerable capability to the Littoral Combat Ship Surface Warfare Mission Package, allowing precision engagement of multiple moving sea targets at ranges of up to 40 kilometers," said Capt. Walt Wright, program manager, Littoral Combat Ship Mission Modules (PMS 420), Program Executive Office Littoral and Mine Warfare (PEO LWM).
***
The Navy version of the NLOS-LS consists of the Raytheon-built Precision Attack Missile (PAM) and Lockheed Martin's joint Container Launch Unit (CLU). The PAM is a low-cost direct attack missile that is seven inches in diameter and weights about 117 pounds. It has a variable thrust rocket motor, dual-mode uncooled infrared/semi-active laser seeker, and a multi-mode warhead. Two-way data links on the PAM allows the missile to be re-tasked in flight and to down-link images of targets. The CLU contains 16 missile tubes in a 4 by 4 configuration. One missile tube is used for command and control and the other 15 tubes contain missiles.

The LCS will have a modular weapons bay built into the ship that will contain four CLUs for a total of 60 missiles. Once all missiles are expended, the CLUs can be removed and new units can be installed to replace them. 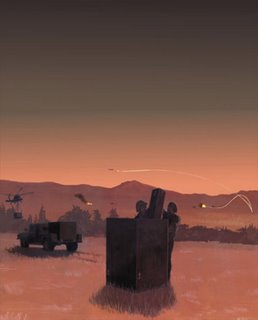