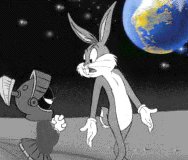 I was recently forced into recalling the cliche about "one man's terrorist is another man's freedom fighter" by a comment made by that eminent philospher Bugs Bunny in his film Haredevil Hare (1948) when Bugs meets the Marvin the Martian for the first time and observes Marvin setting up a weapon: