How much of a stock fall supports this headline?

The headline is Stocks fall amid pessimism about economy. At the time of the report, the Dow Jones Industrials were down .27%: 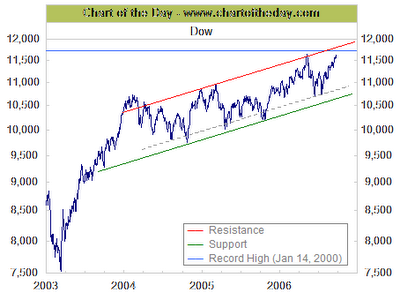 There are a lot of issues that are currently weighing on investors minds (i.e. weakening economy, relatively high prices, war and other geopolitical issues, etc.). Despite all these concerns, the market has managed to rally over the past few months and now trades near record highs. However, it should be noted that the Dow is also fast approaching the top of the trading channel that has been in existence since early 2004.