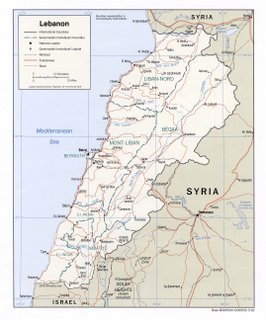 Israel lifted its naval blockade of Lebanon on Friday after European warships began patrolling to keep out weapons shipments for Hezbollah guerrillas, the head of the U.N. peacekeeping force in Lebanon said.

Maj. Gen. Alain Pellegrini, the force's French commander, said he was informed by Israeli officials, and by the Italian commander leading the naval task force, that the blockade had ended after nearly two months.

"The force is now operational and I understand that the (Israeli) naval blockade is lifted," Pellegrini said in a statement faxed to The Associated Press.

I am a little fuzzy on the difference between the goals of the international force and those of the Israeli navy.

UPDATE (10 Sept): Lebanon ports reopen busily. And, as noted in the Davod's comment, there is some question as why the French are bothering to have ships off Lebanon:

France announced on Friday that the international naval force designated to patrol Lebanon's territorial waters would not be authorized to employ force to stop ships from entering or leaving Lebanon.

A spokesman for the French defense ministry said that the international craft would only provide assistance for Lebanese ships, and would not interfere with other nations' boats, Israel Radio reported.