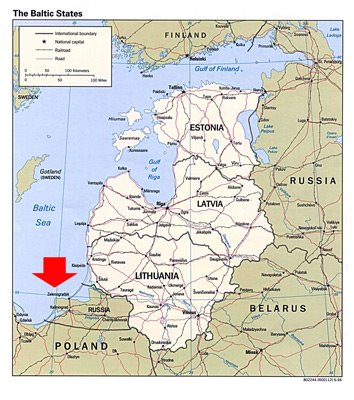 Kalingrad is a Russian outpost isolated from Mother Russia by Lithuaninia and due to a spat between Vilnius and Moscow, was in danger of being cut off from Russia by land. But, as reported here, a sea route and ferry service has been implemented to break the "blockade":

Russia has broken what it regarded as an unfriendly European Union blockade of Kaliningrad by opening a sea route to connect the heavily militarised Russian enclave with "the motherland" for the first time.

A sliver of Russian territory sandwiched between Poland and Lithuania, Kaliningrad found itself marooned hundreds of miles from the Russian mainland when the two countries joined the EU in 2004.

Since then the enclave has been a source of tension between Moscow and Brussels, with Russia arguing that its access to the region is hampered by Lithuania's government, with which it enjoys frosty relations.

Russia's fears were compounded recently when Vilnius threatened to close the main rail route into Kaliningrad "for repairs" in a tit-for-tat row with Moscow over oil supplies. Moscow is therefore billing the new twice-weekly ferry service as an antidote to what has been sarcastically called a new iron or "blue" curtain (the colour of the European Union flag). From now on the Kremlin will be able to supply its most westerly region via a one-day sea route stretching across the Baltic Sea from the port of Baltiisk in the Kaliningrad region to the port of Ust-Luga in the Leningrad region, near St Petersburg.