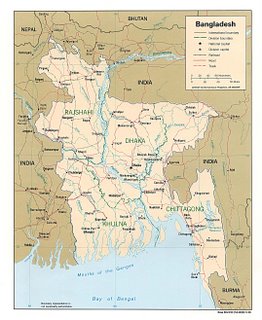 With the decline in pirate attacks off Somalia and in the Strait of Malacca, the latest reports of ICC Commercial Crime Services and ONI's Worldwide Threat to Shipping are mostly about "sea robbers" who board ships to rob the crew or to pilfer small, easily transportable objects as seen here and here.

Of course, the reasons for the decline vary from the imposition of some sort of order to Somalia to the regional cooperation of the Malacca Srait littoral countries. Bangladesh seems to be hot bed of anchored ships being boarded by robbers in the wee hours of the morning. There was this brazen attack, though, attempted while cargo operations were being conducted

2. BANGLADESH: Bulk carrier approached 16 Sep at 0200 local
time in position 22:16.94N – 091:43.08E at Chittagong anchorage
‘a’. Four robbers in a small motorboat approached ship at stern
during cargo operations. Three robbers jumped off the boat and
clung themselves down the rudder/propeller while the boat moved
away. Alert crew mustered and master turned the propeller.
robbers jumped off from the rudder post and were picked by their
boat. Master called port control but received no response (IMB).