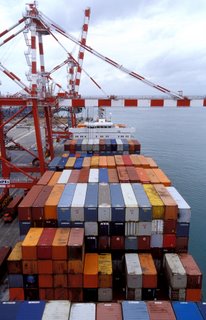 As set out here, Port Security is going to conference between the U.S. Senate and the U.S. House:

The U.S. Senate on Thursday voted unanimously to strengthen security at American seaports, but refused to set a deadline for overseas scanning of U.S.-bound cargo for nuclear weapons.

The U.S. House of Representatives passed a similar bill in May, and the two chambers must now negotiate a consensus version.
***
The bill approved by the Senate 98-0 requires the government to finish installing radiation-screening equipment at major U.S. ports by the end of 2007 to detect nuclear or "dirty bombs," which combine conventional explosives and radioactive material. It authorizes some $3.5 billion for port security spending, aides said.

But the overwhelming vote masked election-year wrangling of recent days, as each party sought to claim the high ground with voters on the key issue of national security. Provisions to boost rail and mass transit security were added.
***
The Senate, controlled by Bush's Republicans, voted 61-37 earlier to scrap a Democratic proposal for a four-year deadline for scanning all U.S.-bound cargo while still overseas. Such a deadline is also opposed by the shipping industry and the Republican majority in the House.

Of course, my favorite stuff comes from Senator Schumer, always on the look out for his constituents:

New York Democratic Sen. Charles Schumer, who sought the deadline, said that it was not enough to install radiation detection devices at home.

He said other countries should install scanning systems that capture an image of contents of U.S.-bound container ships to help inspectors spot suspicious cargo. Shipping companies could pay the cost, about $8 per container, Schumer said.

"We all know we have to push this outward. If a nuclear weapon (explodes) on a ship in New York, and has not yet been unloaded onto a truck, the same terrible consequences exist for the people of New York," Schumer said. (emphasis added)

I am unclear as what difference it makes whether the nuclear weapon is on a ship or on a truck as far as "terrible consequences" that might be suffered by New Yorkers.

I also know, as Mr. Schumer seems to forget, that the costs of screening containers will be borne by the consumers, not the shipping companies, who will just pass their costs along.

UPDATE: Of course, there is this:

Finally, even if container security proves completely effective, it will not make America safe, not even from weapons of mass destruction entering from the sea. One can horrifically imagine, in vivid detail, a glorious oceangoing yacht sailing on a beautiful day into Miami, or Los Angeles, with bikini-clad fashion models and packs of photographers cavorting on deck: Scores of small sailboats circle, stare, and wave, while down below, someone sets off the nuke.

UPDATE2: And, of course, this small problem:

With passage Thursday, the Senate version of the bill must now be reconciled with the House's. While the bills are similar in many ways, it may be difficult to finish work before Congress adjourns for the year, lawmakers said.

If that happens, bill would have to be reintroduced next year when a new Congress convenes.

Same old song, just a drop of water in an endless sea
All we do, crumbles to the ground, though we refuse to see